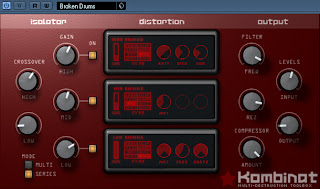 "Kombinat's signal structure allows for a fairly broad palette of sounds, as each segment of the overall effect is a versatile tool in its own right. The Isolator is a full "DJ-style" band-killer EQ; this leads to the three distortion engines, which may be used in multi-band mode for subtle surgery, or in series mode for complete signal destruction. The engines go in to a four-pole lowpass filter of our own design, and then in to a compressor which we have configured for one-knob operation.
Taken as a whole, Kombinat is a tweaker's paradise, yet designed so that it is easy to just grab one of the 64 presets and touch it up a bit to suit the source material. "
http://www.audiodamage.com/effects/product.php?pid=AD019
Posted by Unknown at 9:20 PM No comments: Links to this post

"The SwitchMaid makes choosing the right microphone and the matching preamp easier than ever.
4 microphone inputs with switchable 48V may be combined with 8 preamp loops."

http://www.thirdfloorlab.de/products_sm.php
Posted by Unknown at 1:53 PM No comments: Links to this post

This limited edition EQ is a continuation of the equalizers produced by API exactly as they were in the 1960's, featuring hand-wired switches, the original circuit board design and API founder Saul Walker's signature on the chassis.
Features
The 550A Saul Walker Edition uses the same circuitry as the current reissue of the API 550A. Few equalizers enjoy the respect and admiration of the coveted API 550A. Designed by the now legendary Saul Walker in the late 60's, the discrete 550A was first used as a modular OEM equalizer. As the industry rapidly embraced the sonic quality of the 550A, it quickly found it's way into many custom console designs by Frank DeMedio and other leading engineers. Many of these consoles are still in use today.
Forty years later, the 550A remains the standard against which other EQ's are measured, and it has played a major role in the recording industry for decades. Still copied but never duplicated, the 550A became API's standard channel module EQ when the company began manufacturing consoles in 1971. With virtually all existing units spoken for, popular demand for this EQ resulted in API finally resuming production in 2004.
The 550A provides reciprocal equalization at 15 points in 5 steps of boost to a maximum of 12dB of gain at each point. The fifteen equalization points are divided into three overlapping ranges. The high and low frequency ranges are individually selectable as either peaking or shelving, and a band-pass filter may be inserted independently of all other selected equalization settings. Frequency ranges and boost/cut are selected by three dual-concentric switches, and a pushbutton "in" switch allows the EQ to be silently introduced to the signal path. A small toggle switch is used to insert the band-pass filter into the 550A.
The combination of Walker's incomparable 2520 op amp, and his "Proportional Q" circuitry gives the 550A user an uncomplicated way to generate acoustically superior equalization.
With the long-awaited reissue of this unit, an EQ that has had such a part in the history of recording is continuing to make history in today's music.
MSRP: $2195
Posted by Unknown at 12:04 PM No comments: Links to this post

The VOG analog bass resonance tool is the latest creation from Little Labs, and is Little Labs first entry in the popular API 500-Series module format.

The VOG was originally designed to capture the chest resonance of vocalists or voice over artists, enabling them to still have a proximity type effect without havingto be so close to the mic, hence the name, VOG, or Voice of God. However, once it was used on kick drum and bass, it became clear this would be the go to device to make them sound huge.

The VOG lets users sweep a sharp peak resonance from 20 to 300 Hz, while anything below the peak is rolled off at a steep -24dB per octave. This lets users focus on the low end they want, while eliminating low-end mush and unnecessary woofer excursion.

A subharmonic can be the focus, or the fundamental, or upper harmonics. On a kick drum, for example, the overall effect of turning VOGs frequency knob sounds like someone is tightening or loosening the drumhead. In a mix, VOG allows users to place the bass spectrum instruments so they do not interfere or get in the way of each other.
The VOG can be found at various dealers for approx. $375.
Posted by Unknown at 9:25 AM No comments: Links to this post