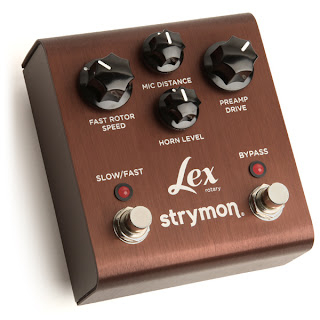 "Lex provides you with a complete, accurately reproduced rotary system: the low-frequency bass rotor, the rotating treble horn, the tube-driven amplifier, finely tuned microphone placement, and all the complex sonic interactions between these elements. Utilizing a ridiculously powerful SHARC DSP, every drop of processing power is harnessed to authentically represent these details.

You get eight parameters to tweak, allowing extensive control over the tonality and mechanics of the rotating speaker system. You can manipulate each element, from rotor speed, horn level, acceleration time, microphone distance, tube drive and saturation, and volume level. Go from a maelstrom of dramatic, up-close, sweeping and swirling sounds, all the way to mellow, tranquil and calming undulations. All of this without a giant cabinet, microphone setup, and costly motor maintenance."
Visit Strymon's website for more info:
http://www.strymon.net/products/lex/
Posted by Unknown at 7:47 PM No comments: Links to this post 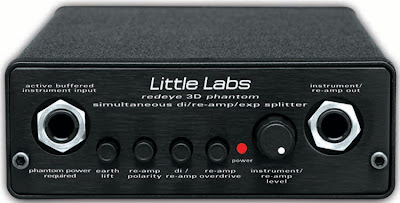 The AD2055 is one of my favorite hardware equalizers. The words open, detailed, transparent, surgical and sheen come to mind when describing the AD2055. I've used this on various sounds on many mixes over the years but my favorite application is vocals. For example, I used the AD2055 on Estelle's vocals for various songs on her "Shine" album including her song "Come Over" featuring Sean Paul (produced by Supa Dups). I also used it (the Salaam Remi produced songs) on both Amy Winehouse "Frank" and "Back To Black" albums.

The AD2055 can be purchased at various dealers including B&H Pro Audio dept. for $3,960.
http://www.bhphotovideo.com/c/search?Ntt=Avalon+AD2055&N=0&InitialSearch=yes

U2 to Snatch 'Biggest Tour Ever' Title This Weekend

hen the doors open Sunday night for U2's second show at Morumbi Stadium in Sao Paulo, Brazil, the band's 360 tour will become the highest grossing tour in history.
In Sao Paulo, U2 360 will pass the $558 million gross mark set by the Rolling Stones for their A Bigger Bang tour of 2005-2007. U2 will go on to shatter the record at about $700 million by the time it wraps in North America July 30 at Magnetic Hill in Moncton, N.B., and when all the numbers come in be recorded in Billboard Boxscore as the biggest trek ever. The tour returns to North America May 21 in Denver.
360 will also have moved more than 7 million tickets to 110 shows, enough to capture the "highest attended tour ever" mantle, as well. The Stones are also the band to vacate that title, as their Voodoo Lounge tour of 1994-1995 had held the attendance record at 6.4 million tickets, according to Boxscore.
Video: U2 performs "Beautiful Day" in Gothenberg in 2009

Owning the "biggest tour ever" record is "something we're very proud of having set," band manager Paul McGuinness tells Billboard. "And to set it with a further 20-plus shows to go on the tour is kind of mind-blowing. It means that it's a record that will probably never be outstripped."
ichael Cohl, producer of Rolling Stones tours from 1989 through A Bigger Bang (and currently lead producer on Spider-Man: Turn Off the Dark), called U2 capturing the title "an incredible achievement, a great group, [360 is] an amazing tour. Congrats."
Topping all previous tours at the box office is the culmination of a career effort by a band that built its foundation around live performance. "We were always very conscious that we had two parallel careers, as recording artists and as live performers, and each was absolutely vitally important," McGuinness says. "In our own kind of quiet way we were all somewhat military about it. We would talk about territories and conquering them, and if there was somewhere that was slower to come along, we would go back there and work it again. Bono is kind of a closet General Patton. So, for us, this is a real victory."
This time around, no areas were slow for U2. On the average, both gross and attendance are staggering numbers at about $6.4 million and 63,600 per show, respectively, surely in itself a record, though as-of-yet unquantified by Boxscore.
For tour producer Arthur Fogel, chairman of Live Nation Global Touring, and his Toronto-based team, there is still work to be done. "It's great to break the record, but after that there are still 26 shows left," Fogel says. Even so, breaking the gross record is "an amazing accomplishment," Fogel says. "I don't think the average person can really relate to the whole thing, it's hard enough for us to come to terms with it. More than the dollars, when you think in terms of when this thing does wrap it will be over 7 million tickets on 110 shows, it's just mind-blowing on an average per show."
The success of 360 is more a statement about the band's global popularity and the unique 360-degree staging and its resulting capacity increases of 15%-20% than it is about ticket prices, which ranged from as low as $30 to a top end of $250. The attendance mark is "absolutely the bigger accomplishment," Fogel says. "There are so many factors that play into it: the unique nature of the production, the ticket pricing model, the strategy of where to play and how many tickets are in the market," he says. "It all comes in to play, and when it actually unfolds as you would want it to, then I guess it's the perfect storm."
Launching the most expensive touring production in history with huge capacities in an uncertain global economy was ambitious, to say the least. Staged as it is, 360 risked looking ridiculous if it played to half-houses. "It was a bold move on behalf of everybody, because the reality is, with this production, you're kind of naked out there, there's nowhere to hide," Fogel says. "So when you undertake that kind of production, sightlines and staging, you better be pretty confident you can pull it off."
360 was the first tour under a 10-year multirights agreement between the band and Live Nation, and beyond the staging configuration the tour's "360" banner is a sly reference to that deal, according to McGuinness, who calls the tour name "a little private joke to amuse myself at one point." When it's all said and done, U2 360 will have visited more than 30 countries, dating back nearly two years ago to the opening show in Barcelona, Spain on June 30, 2009. Sidelined last summer by back surgery for the band's Bono, 360 never missed a beat when it resumed. The tour visited Australia/New Zealand, South Africa, South America, Europe, North America, and Mexico.
Going forward, there is a new champ in the Billboard Boxscore records. "Frankly, if anyone else said it was the biggest tour in history it wouldn't count," says McGuinness. "You guys are the journal of record."
Given the unique capacities that the 360 production allows and the band's massive popularity all over the world (as well as the uncertainty of the Rolling Stones' touring future and the fragmented nature of music today) this is a record that will likely stand for many years if not forever. "This is one of those things that is so special and unique that, in this form, it probably only comes around once," says Fogel, who has now produced four of the top five highest grossing tours of all time. "And I think that's OK. It accomplished everything that everyone set out to accomplish, and I think that's the way it should end."
Posted by Unknown at 9:05 AM No comments: Links to this post