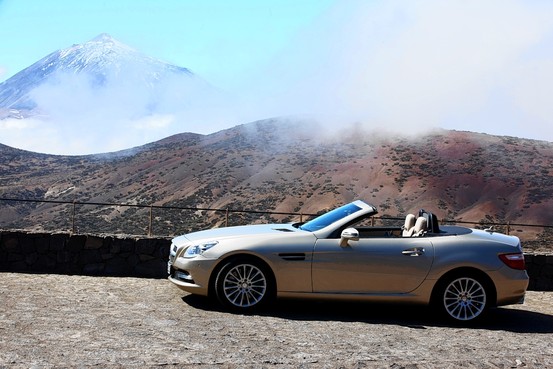 The Mercedes-Benz SLK's problem is diminution. It's a strange old word, so I'll explain. Diminution refers to the quality or process of being reduced in size, extent or importance. It comes from the same Latin root as "diminutive" and "diminished," and neither notion does the SLK any favors. For to be diminutive is to be small and preciously sized, wee and wondrous, like a dwarf pony, or Mick Jagger. Cute, in other words.
And despite the fact that the new, third-generation SLK—the "K" stands for kurtz, German for "short"—is potent and hugely entertaining to drive, it must contend with the fact that this class of car tends to be received as, you know, adorable. Small, luxurious roadsters with a lot of style seem feminine, even a little prissy, the white tees on life's golf course. I'll use that most dreaded and impolitic of phrases: The SLK is a chick car.
It's in excellent company. Mazda's MX-5 and Porsche's Boxster register as chick cars, even though they are both insanely good driving machines. Indeed, these facts are related since a smaller car typically is also lighter, quicker and more nimble. But little comfort that is when you wheel your sky-blue SLK up to the American Legion hall and your buddies inquire about the state of your ovaries.
I know this is all monstrously sexist, except it isn't. Human beings are sexually dimorphic and our apprehension of the designed world corresponds to the difference. Men are bigger. Women's clothes and shoes are so much smaller than men's that they require a different sizing system. If for no other reason than as an artifact of evolutionary psychology, smaller things tend to strike us as more feminine and larger things seem more masculine (with the exception of RuPaul).
Mercedes's designers know all this and they have, in the years since the SLK's introduction in 1996, gradually attempted to butch it up: pronounced hood bulge, F1-inspired front fascia, more aggressive rear fascia. Hmm. Nope, still cute. With the new 2012 redesign (on sale Saturday), the designers went in a very different direction, developing a car that echoes most of the cues, the proportions, and the ratios of Mercedes's bigger (around 180 inches vs. 162.7), more expensive, and inexpressibly more masculine convertible, the SL. 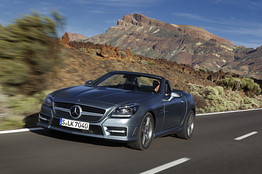 Mercedes-Benz
Small, luxurious roadsters with a lot of style seem feminine, even a little prissy, says Mr. Neil.
Now, to be clear, the next-generation SL, due in 2012, hasn't broken cover yet so I'm relying on spy shots of the car. But it seems apparent the SLK and SL will look pretty similar. Partly due to new pedestrian-safety standards, the SLK's grille is taller, more upright and collared forward past the plane of the headlamps. Ditto the SL. In both cars a single strake of brightwork divides the grille and midlines the prominent, enamel-like Mercedes star. The headlamps, the beaded LED foglamps, and the geometry of the upper and lower grille openings—what's known as the down-the-road graphics—look to be nearly identical.
Roofline, tail lamps, light contours, door height…I won't drag you through it. Suffice to say the SLK is a preview of coming SL attractions, printed on a postcard.
What could be wrong with this twinning? Isn't brand character important, especially when your brand is as august as Mercedes-Benz? Yes, but it's also a bit of a lost opportunity. Look at Audi's A4, A6 and A8, the classic one-sausage, three-lengths product strategy. They are handsome cars, true, but by now the handsomeness feels rote.
And roadsters are not sedans. They are totally optional cars, expressive of the driver, pure self-definition. And so the SLK's writ-small resemblance to the larger car will amount to a kind of status land mine. Hey, Bill bought a new SLK. Niiiice. Boy, it looks a lot like the SL. Wonder why he didn't get that? Oh yeah. Because he can't afford it!
Now tell me that's not how people think. See Bill. See Bill drive the SLK. See Bill diminished.
Is the new SLK is a good car? Yes. Actually, it's wonderful, but there's no surprise and little sport in that, is there? The car will initially be offered with three engines: two 1.8-liter turbo fours (not yet available in the U.S.); and a 3.5-liter, direct-injection V6, the SLK 350 BlueEfficiency ("BlueEfficiency" refers primarily to the company's new fuel-saving stop-start system). I spent the day bombing around Tenerife in the 302-horsepower SLK 350 and it was one of the best driving days of my life. 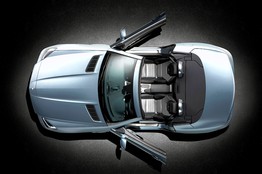 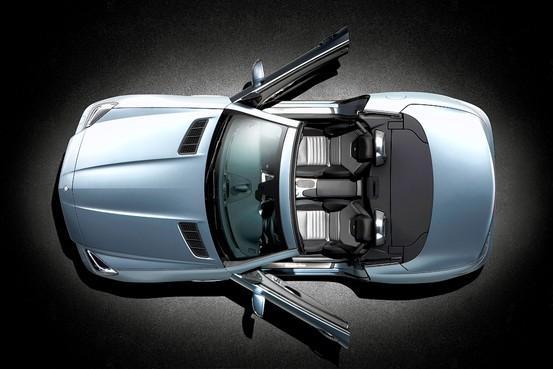 As is its habit with new-product introductions, Mercedes debuts a cool new technology with the SLK: a tinted glass roof panel that becomes transparent at the touch of a button. A small electrical charge aligns microscopic "light valves" embedded in the glass to let in light. Mercedes calls it the "panoramic vario-roof with 'Magic Sky Control.' " Great name. And they say Germans have no sense of humor.
Small on the outside (162.7 inches long, 4.3 inches shorter than a BMW Z4), the SLK feels quite spacious once you land in the driver's seat. Stuttgart's seamstresses are working overtime on this car, double-stitching door gussets, seats (optional two-tone) and the upper dash in creamy leather. Brushed aluminum or a selection of figured wood trim finish the interior. The SLK also gets a really great, flat-bottomed steering wheel with perforated-leather grips at the 3-and-9 positions, and quadrant-style buttons for phone and car functions.
The only misstep in the SLK's interior—and this is huge—is that the two alloy air outlets in the center console, on each side of the LCD nav display, don't line up with the center stack, throwing off the entire symmetry of the dash and instruments. It was like having to walk by a crooked painting and not being able to straighten it. Unforgivable.
The SLK also debuts a system called "Airguide." To block wind tumbling into the car from behind, two roughly triangular Perspex panels pivot out from behind the headrests. And you can still get the "Windscarf" headrests that blow warm air on your neck, a system that raises the question: Is my car coming on to me?
Never mind deflecting the wind. What about deflecting the "chick car" label? The SLK has it covered. For starters, the car sounds great, with big open-throttle noises and thick overruns as throaty as a Tibetan lullaby. The SLK stock box is a seven-speed automatic with paddle-shifters, and these work quite well for manual shifting. Otherwise you can just pull the shift lever into Drive and toggle the car into Sport mode. Now the transmission anticipates corner-entry downshifts (it's watching your speed, braking and steering angle) and holds gears on long, sweeping corners, of which there are plenty on Tenerife.
Mercedes estimates 0-62-mph acceleration in 5.6 seconds and I'd be amazed if the SLK wasn't a couple ticks quicker. It certainly felt it.
My test car was equipped with the Dynamic Handling package, which includes: adaptive suspension damping; dramatically quicker steering; and torque vectoring on the rear axle. And all of it orchestrated by the car's profoundly clever suite of dynamic safety systems. The SLK has excellent bite in the front tires, massive braking, surprising lateral grip, and when you open the throttle to kick out the rear end coming out of a hairpin—there's plenty of those, too, on Tenerife—the car will oblige safely and progressively.
And then it just stops…rotating…suspended in midfishtail by the stability-control system, which has decided you've had enough fun. The car wiggles a bit, straightens out and off you go.
The only car that has managed to transcend this segment's typology of cuteness is the mean-looking BMW Z4, which you'll remember started out life as the completely precious Z3, the rainbow unicorn of German roadsters. The Z4 proves it can be done. Will the SLK do it? I don't know. It's still pretty adorable.
Posted by Unknown at 3:32 PM