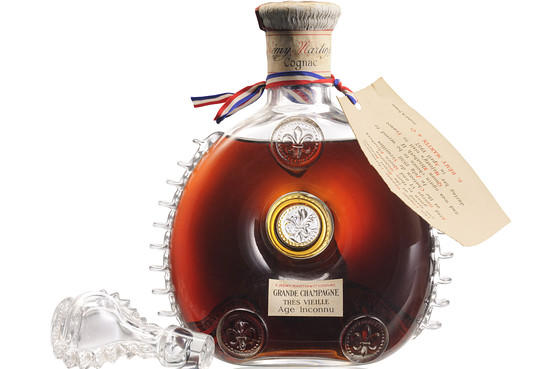 Two weeks ago, a bottle of Rémy Martin cognac — called the Louis XIII Grande Champagne Très Vieille Age Inconnu — sold for 50,000 euros (US$70,155); it was the highest price ever paid for a Rémy Martin.
The Rémy Martin cognac, a brand owned by French winemaker Rémy Cointreau, was on display alongside other fine spirits and wines such as a bottle of Royal Salut Tribute to Honour whiskey, which went for 278,000 Singapore dollars (US$219,964).The buyer was unidentified, but the bottle fetched its list price at a first-ever invite-only sales exhibition of alcohol in Singapore, “Master of Spirits,” organized by DFS, the Hong Kong-based duty-free retailer. Lynn A. Arce, a DFS consumer-marketing vice president, said the company plans to hold more such sales exhibits in the future.
Augustin Depardon, a global marketing director at Rémy Martin, says that the company decided to open its heritage cellars — a rare cache of its “oldest and most refined” eaux-de-vie (fruit brandies) — for the Singapore sale because it is “a cosmopolitan city known for attracting passionate collectors.” Apart from a 2005 exhibition in Shanghai, this is the only time that Rémy Cointreau has sold a heritage-cellar bottle of brandy in Asia.
He tells us why the Louis XIII de Rémy-Martin was valued at 50,000 euros.
A true cognac: In the world of alcoholic spirits, only a specific kind of brandy, which is made from white grapes, can be called cognac. Mr. Depardon, who is based in France, says the term refers to brandy from the French region of Cognac that has been distilled twice in copper stills made in the French region of Charente and is then blended by a cellar master. It must be aged for at least two and a half years and possess an alcoholic content of at least 40%. Regular brandy is typically aged for at least six months and contains 36% alcohol.
Provenance and age: The Rémy Martin cognac was marketed as consisting of “a century in a bottle”: It was one of a series of cognacs bottled for a 1938 royal banquet at the opulent Château de Versailles that King George VI and Queen Elizabeth attended (parents of the current Queen of England). Mr. Depardon notes that some of the eaux-de-vie blended to form this particular cognac date back to the middle of the 19th century.
Timeliness: Mr. Depardon says he thinks it was a “fortunate coincidence” that the cognac went on sale shortly after the movie “The King’s Speech” won Best Picture at the Oscars in late February. Rémy-Martin’s marketing department played up the cognac’s link to the movie, which starred Colin Firth as the stammer-prone King George VI (the actor won Academy Award Best Actor for his performance). Even so, it is a stretch to suggest — as the press materials did — that the cognac “may have been what left George VI speechless.”
Exclusivity: Mr. Depardon says that the price reflects the cognac’s “value of rarity.” The carafe of cognac sold at the DFS exhibit was one of the few remaining in Rémy-Martin’s heritage cellars, which holds the “rarest and most delicate eaux-de-vie” in the brand’s collection since it was first bottled in 1874. He declined to reveal how many bottles remain in the heritage cellars.
Packaging: The crystal carafe of cognac comes with some history. It is based on the design of a 16th-century metal flask, says Mr. Depardon, discovered by a vine grower in 1850 in a battlefield near Cognac, the French town from which the spirit draws its name. For the sale, the decanter was placed in a jewelry box made from lacquered rosewood and leather embossed with an ostrich-skin pattern.
Ingredients: More than 1,200 brandies were blended to form this cognac. The ugni blanc,colombard and folle blanc grapes used to make them were harvested in the Grande Champagne area, which Mr. Depardon says possesses the “most prestigious” vineyards in Cognac.
Posted by Unknown at 1:56 PM