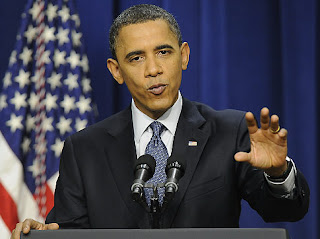 You know who is the first to tell you that speeches got Barack Obama where he is? He is. The people around Obama have gotten an earful of that since he became President, often when he has been challenged on the idea that words aren't going to fix some kind of problem in America. He hits them with the line about speeches like hitting somebody with an elbow under the basket.
Now, Monday night, this President gives a speech about Libya that is supposed to bring clarity to our mission there, whatever that mission actually is. So far all we have been told is that he wants our presence in the skies above Libya to last slightly longer than a spring-break trip to Rio, and that we are there for humanitarian reasons.
You wonder what the people of the Congo think when they hear we are dropping bombs to prevent a humanitarian crisis in a place like Libya, where Moammar Khadafy suddenly becomes a threat after all this time in power. Or any other place in the world where people about to be slaughtered wonder when the Marines are coming over the hill, or B-2s will start dropping bombs to save them.
Maybe, for once, in the third year of his presidency, he can sell one of his big ideas, the current big idea of the moment being this country's presence in Libya.
Not long ago a friend of mine was talking to an Illinois politician, and made some passing remark about the guy knowing Obama.
"I'm not sure anybody really knows him," the politician said.
In that way, the politician could have been speaking for the country. It doesn't mean Obama won't be reelected. You can't beat somebody with nobody. Still: It is amazing, considering the soaring rhetoric of his campaign, how he has come across as a commander in chief who can't explain himself better than his predecessor did. In a complicated world, he is the last person in it whose words should lack clarity. Too often they do.
He needs to do better Monday night explaining Libya. As always, Obama wants it all ways, wants this mission to be some kind of moral imperative for this country even as he keeps pointing out that other countries took the lead. You understand sometimes why those who oppose him on everything, including his Final Four brackets, think the thing he has always governed best is his own ambition.
The armies of the right didn't do this to him, or the attack dogs on the other side of the aisle. Too often the President has done this to himself. He never explained himself properly on health care, even though he had the high ground on that. He talked for his whole first year in office about health care when he should have been spending so much more time on jobs, and still couldn't sell his plan - or his own ideals - to the American people.
He was all over the yard on what should be done about terror trials in this city. He talked as tough as he possibly could about the closing of Guantanamo Bay, only now it's not closed. Lately, he is spending tens of millions of dollars a day bombing Libya - some say more than $100 million the first day alone for all the Tomahawk missiles. This at a time in this country when we are told there is no money for teachers or schools and gas costs more than four bucks a gallon.
Maybe Monday night the President can tell all the voters he wants to reelect him just why Libya should to matter to them. Because for a smart guy, he has done a lousy job of it so far, and not just with members of Congress to whom he reached out only after the bombs were already falling again across the world. What he certainly cannot do in this speech from the National Defense University is what he did in Afghanistan, which is send more American soldiers over there to fight and die at the same time he is telling us when the ones who are still alive will be leaving.
This is a President who needs to explain to the country why we may soon spend a billion dollars on Libya, convincing the country at the same time that he or anybody else in his administration actually knows who the rebels on the ground are, the rebels being empowered by American air strikes.
Once, on the campaign trail, when the Rev. Jeremiah Wright threatened Barack Obama's ambition, the candidate Obama stood tall in Philadelphia and gave a speech about race in America that ultimately helped elect him. Monday night, he needs to do much better.
Mostly, he needs to level with the American people, maybe even persuade them that he won't wait to be a great President until it is time to run again.
Posted by Unknown at 7:49 AM