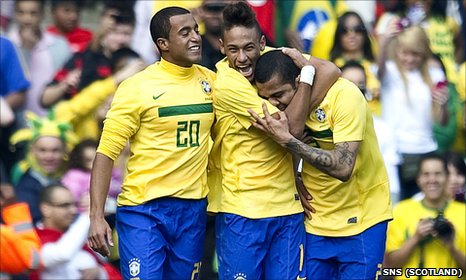 A young Brazilian side were comfortable winners against Scotland in London

Neymar strengthened his burgeoning reputation with both of Brazil's goals as they saw off Scotland in a friendly at the Emirates Stadium.
Jadson and Leandro Damiao went close before Neymar fired Brazil in front near the end of the first half.
The Santos striker netted his second from the penalty spot after he had been fouled by Charlie Adam.
The Scots struggled to keep possession throughout, Barry Bannan's free-kick the closest they came to threatening.
Having won their last two matches 3-0, confidence had been growing in the Scotland camp but the rankings slip likely to follow from this defeat may impact on which pot Craig Levein's men go into in the upcoming World Cup qualifying draw.
There was a huge gulf in quality between the sides but Scotland did have an early chance to make an impression when Lucio bundled over Kenny Miller a few yards outside the box, only for Adam's free-kick to cannon off the defensive wall.
There was a menace about Brazil every time they crossed the halfway line, often aided and abetted by Scotland conceding possession, but the final ball was often overcooked.
Elano sought to change that trend with a back-post cross that was headed high over the top by Chelsea's Ramires.
A more incisive pass by Elano put Jadson through and, though goalkeeper Allan McGregor spilled the shot, the danger was eventually mopped up.
Minutes later, Leandro Damiao's header from Elano's corner clipped the top of the crossbar on its way out.
Scotland then survived a penalty call when Lucas Leiva's low cross deflected onto the hand of Gary Caldwell after another incisive move from the South Americans.
Having been on the back foot for much of the first half, the Scots were afforded some relief when James Morrison was tripped by Dani Alves inside the Brazil half and Adam's teasing delivery was glanced just wide by the head of Steven Whittaker.
Scotland's resistance was eventually broken in the 42nd minute when Andre Santos' cutback found Neymar in space and the teenager skilfully cushioned the ball before placing a shot into the far corner of the net.
More carelessness in possession by Scotland gave Brazil two chances to score early in the second half.
Neymar caught the top of the bar with a shot on the run after Adam had given the ball away before the busy Ramires stole from James McArthur and tried to set up Neymar for an open goal.
McGregor had come off his line and diverted the pass with his fingertips before bravely blocking Leandro Damiao's follow-up shot.
Ramires, a study in perpetual motion, was not so impressive in front of goal as he blazed over from Dani Alves' low cross as Brazil continued to pour men forward.
The introduction of Bannan and then Kris Commons for McArthur and Whittaker gave Scotland fresh attacking impetus and Adam flashed a shot over after cantering towards the penalty area.
But Adam's afternoon took a turn for the worse when he foolishly felled Neymar in the box and the sought-after Santos striker picked himself up to stroke home the spot-kick 13 minutes from the end.
Substitute Lucas got the Brazil fans off their feet with a blistering run and one-two with Neymar, the Sao Paulo teenager's eventual shot deflected into the arms of McGregor.
Peterborough's Craig Mackail-Smith was given his Scotland debut as a replacement for Miller before Bannan's free-kick was comfortably collected by Brazil keeper Julio Cesar as the match wound down.
The pace and trickery of Lucas, making his full international debut, set up fellow substitute Jonas for a gilt-edged chance in injury time but the towering forward hammered his shot over.
Posted by Unknown at 1:49 PM