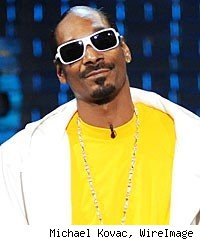 Snoop Dogg is being accused of promoting underage drinking, by "alcohol industry watchdog" the Marin Institute, for his endorsement of Blast by Colt 45.
The group is accusing Snoop of using his popularity to encourage minors to drink the beverage, produced by the Pabst Brewing Company. In an attempt to halt the production of beverages like Blast, which contain both alcohol and soda, Marin reached out to California State Senator Alex Padilla to ban the drink and others like it.

"While the federal government was shutting down dangerous caffeinated alcohol, Pabst Brewing Company was cooking up 'Blast,' a super sweet, fruit-flavored, supersized alcopop containing as much alcohol as four and a half cans of beer," said Marin CEO Bruce Lee Livingston. "Joose, Four Loko, Tilt and now Blast are racing to the bottom to harm youth. Senator Padilla's bill should limit such products to one standard-size drink."
Livingston argues that Snoop's affiliation with the brand is directly related to the injuries reported by numerous college students between of the ages of 17 and 19. The institute reported that more than 2 million youth illegally drink alcohol in the state of California, costing the state $7.3 billion a year.

Last year, the federal government banned seven alcoholic beverages containing caffeine, including Four Loko and Joose, but Marin hopes to get more off of the market. Blast, a fruit flavored drink, contains 12 percent alcohol in a 23 ounce can and features labels resembling bubble gum wrappers, which some argue directly targets young people. The drink is scheduled to hit shelves next month.

Snoop has yet to release a statement on the matter.
Posted by Unknown at 8:54 AM