Chinese Animal Activists Save Hundreds of Dogs From Being Eaten 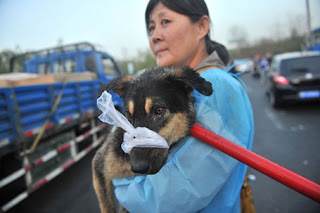 Hundreds of dogs were spared being served on the dinner table in China after activists staged a 15-hour standoff to save them.

Last Friday afternoon, hundreds of dogs were on their way to Chinese restaurants when a suspicious driver swerved his car in front of the truck to stop it. He then alerted activists on his microblog, who gathered 200 strong around the truck. They rendered the vehicle immobile, jamming traffic on the highway.
After a long standoff right outside Beijing, an animal activist group managed to free the dogs by purchasing them for 115,000 yuan ($17,600). Conflicting reports differ on the number of dogs involved, but the Global Times has placed the number as high as 520.
Sadly, many of the dogs were found with collars and nametags, indicating that they may have been stolen from their beloved owners. The healthy dogs will be put up for adoption while the sick ones were sent to pet hospitals in the nation's capital. Unfortunately, it is unclear whether some of the allegedly stolen dogs will ever be reunited with their owners.
Both dog and cat meat are popular delicacies because they are believed to promote bodily warmth during the winter season. In recent years, authorities have considered putting measures in place to outlaw the practice.
Local newspapers suggested that the transporters would probably face no repercussions. Animal protection laws barely exist in China, and the truck had all the legal permits to transport the animals. Still, it's one significant victory for Fido lovers everywhere.
Posted by Unknown at 6:49 PM