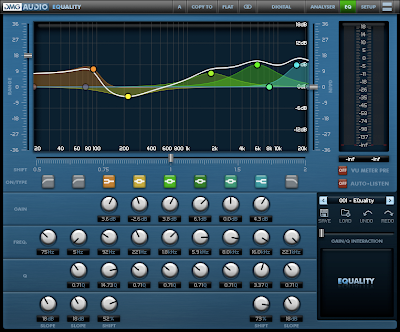 Dave Gamble formerly of Sonalksis, Focusrite and Novation designed the EQuality plug-in.
"It has nine bands (four bell/notch, two shelf/bell, dual high-pass and one low-pass), five EQ styles, M/S processing, a spectrum analyser, foldable interface and more."
The Range slider scales the gain of all bands simultaneously, from -36dB to 36dB, with the negative settings enabling you to 'flip' your EQ curve, so boosts become cuts and vice versa. There's a global EQ frequency Shift slider too, working as a multiplier ranging from 0.5 to 2.
Next up, you'll find that the shelving bands have their own Shift knob, with which you can move their points of resonance. The gain/Q interaction is fully adjustable - with higher settings, increasing gain narrows the Q, which is a feature associated with analogue EQs.
Rounding things off is the 'auto listen' option, which solos the band you're modifying, to assist with fine-tuning and locating problem frequencies. Amongst the many preferences are meter ballistics and scaling options (VU, PPM, digital, BBC, full scale, Kf12, Kf14 and Kf20).

"EQuality includes five EQ modes. For most uses, DMG suggests using Digital or Digital+, the latter having a slightly more accurate high-end response. Both are zero-latency and CPU-efficient. It's worth saying that these modes have been designed to sound 'analogue', so don't be put off by the names.
The remaining three all employ impulse-response-based (FIR) techniques. The Linear Phase option gives zero phase distortion but with some processing latency. The Analogue Phase mode uses a similar technique but instead replicates the phase shifts of an analogue EQ.
Finally, Minimum Phase shifts the energy of the impulse response to the start, so there's no delay and minimal transient smearing. The differences between modes are subtle, but they can become more pronounced if you have other processing following the EQ, such as saturation/distortion."
http://www.dmgaudio.com/index.php?_view=products.product.0
Posted by Unknown at 7:03 PM