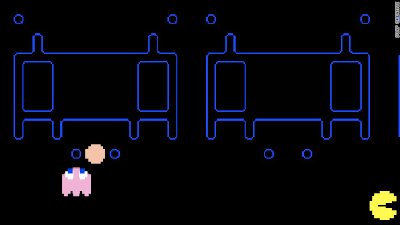 If you wasted too many hours of workplace productivity playing Google's Pac-Man tribute, you'd better call in sick for this one.
To promote Namco-Bandai, the creators of the arcade classic, an Australian firm has created what it's calling the World's Biggest Pac-Man game.
And it's letting users make it even bigger.
Soap Creative, which designed the official Pac-Man website, rolled out the online game last week. Since then, players have gobbled up nearly 270 million dots and sacrificed the life of video-game history's hungriest golden orb more than 1.4 million times.
Maybe more impressively? Fans have helped created more than 12,600 interlocking mazes. Players can play on multiple mazes in a single game. The exits that let you zoom to the other side of a maze in the original version of the game transport you to the next maze in this one.
"It has been labeled 'an internet hit,' the world's biggest waste of time and time-wasting brilliance," the massive game's creatorswrote on their website. "All of which we are happy about."
The project grew out of a collaboration between Namco and Microsoft Australia, and uses HTML5, the emerging tool for building web applications (and the latest version of HTML, the most popular coding language).
Some of the user-created levels mimic the style of Pac-Man's original mazes. But many others add a new dash of creativity.
A glance at the game's main page shows mazes whose walls form images of robots, mushrooms, a yin-yang symbol and what appear to be several self-portraits.
Other mazes celebrate video-game classics like Sonic the Hedgehog, Mario Brothers and Space Invaders.
Of course, this being the internet, not all images are as creative, or in good taste.
The company says its constantly scanning new mazes for inappropriate images, including an anatomical favorite of juvenile minds everywhere.
"We're happy that the 'penis to non-penis levels' ratio is well below 1:100 (the standard for user generated campaigns) ...," the company wrote on its blog. "We've been watching the moderation closely, so every penis has a short life."
Posted by Unknown at 10:15 AM