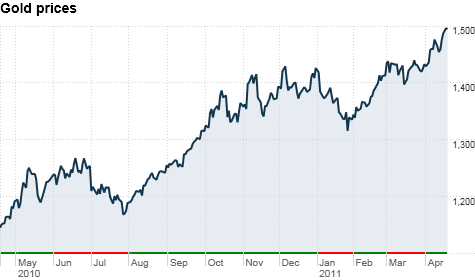 Click chart to track the price of gold.
Gold prices topped a record $1,500 for the first time ever on Tuesday, shattering an important psychological barrier as investors seek out investments thought to be safe during times of upheaval.
Many investors see gold as the best place to park their money when there's economic or policital uncertainty, and there has been plenty of that to go around.
The price spike also comes against the backdrop of market uncertainty that has sent investors looking for an alternative to the weak U.S. dollar. And gold has been the marquee beneficiary.
On Monday, it was a dour outlook on U.S. debt that sent gold prices higher.
Standard & Poor's lowered its outlook for America's long-term debt to "negative" from "stable," based on uncertainty surrounding the nation's fiscal problems.
That's exactly the type of news that creates a flight to safe haven assets like gold.
Gold futures for June delivery hit an intraday record of $1,500.50 an ounce near midday, before retreating to settle at $1,495.10 an ounce -- also a new record.
The price of gold has tracked steadily higher in recent months, as a cavalcade of unsettling world events created uncertainty in global markets.
Since the start of the year, investors have been forced to consider the implications of a Japanese tsunami, earthquake and nuclear disaster. That's in addition to a spike in crude prices and a slew of revolts in the Middle East and North Africa.
Inflation -- which gold is often used to hedge against -- has been rising sharply in emerging economies and is becoming more of an issue in Europe.
Gold and silver keep shining. Thanks, S&P!
Carlos Sanchez, director of commodities management at New York-based CPM Group, said prices could go as high as $1,550 in the next couple weeks as investors focus on political gridlock in Washington.
The next major event for the gold market is the May deadline for the government to raise the debt ceiling, Sanchez said.
On Tuesday, silver prices were also on the rise. The understudy commodity settled at $43.75 an ounce -- its highest level in three decades.
Of course, the records this week are not adjusted for inflation. Gold rose to $825.50 per ounce on Jan. 21, 1980, which is $2,211.65 in today's dollars, according to the Minneapolis Fed Calculator.