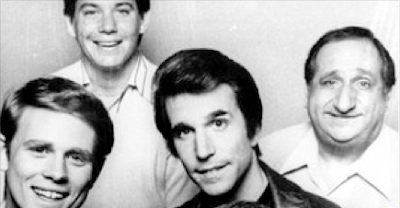 Actors from the cast of Happy Days are suing CBS Studios for more than $10m (£6.1m) in damages, claiming they have been denied profits from merchandise.

They say CBS released DVDs and allowed their images to be used on products including lunchboxes and gambling machines without sharing revenue.

Anson Williams, who played Potsie, and Don Most - Ralph Malph in the sitcom - are among cast members who have brought the case in Los Angeles.

The actors contend that a "if you don't ask, then we don't pay" policy conflict with contracts promising the cast a share of merchandise revenue.

The case is also being brought by Marion Ross, who played Marion Cunningham, Erin Moran (Joanie) and the estate of the late Tom Bosley, who played Howard.

Neither Winkler or Ron Howard - who went on to become an Oscar-winning film director - are part of the claim.
Posted by Unknown at 5:57 AM