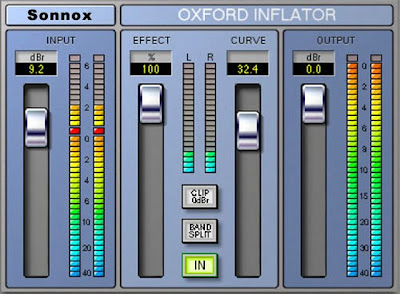 The Sonnox Inflator plugin (part of the Sonnox Elite Bundle) is a loudness enhancer but operates differently than a limiter. A limiter reduces the dynamic range and then raises the overall level of the signal. the Inflator also raises the average (RMS) level of the signal but doesn't change the dynamics of the music. So you can make your mix louder but without it having that squashed lifeless sound. When used in conjunction with proper limiting it will give much better results than just using a limiter by itself.
The Inflator controls consist of INPUT, EFFECT, CURVE and OUTPUT. There are also CLIP 0dBr, BAND SPLIT and an IN button (bypass). The INPUT fader sets the level of the signal entering the plugin and should usually be set at Odb. It can be set above Odb to overdrive the plugin for distortion effects. The EFFECT slider controls how much enhancement is added by the plugin. The range is 0 to 100%. The CURVE slider adjusts the processing nature of the plugin (i.e. less/more pronounced). The output slider sets the output of the plugin. This s definitely needed when inserting other plugins after the inflator. The CLIP 0dBr button when lit prevents clipping by restricting the maximum output of the Inflator to Odb digital. When turned off this button allows the plugin to be overdriven at will. Also when the CLIP 0dBr is de-selected the input meter levels will show how much overdrive is being added to the signal. The BAND SPLIT button selects between full bandwidth processing and splitting the signal into LF (low frequency), MF (mid frequency) and HF (high frequency) bands. In most cases it's best to leave this de-selected but feel free to experiment.
This plugin is usable on the stereo buss, group aux or even individual sounds especially when overdriving the Inflator to add not just level but harmonics to the sound.
A good starting point is to set the effect to 100% and the curve at 0. Also set the INPUT and OUTPUT to 0. Now play your song or mix and listen to what the Inflator is doing to the sound. Adjust the curve to see how it changes the perceived loudness and texture of the sound. When set to the minimum of -50 the Curve has the effect of increased harmonic content but less perceived loudness. It also tends to emphasize the louder more present elements of the song/mix and reduce the level of the softer more ambient parts. This setting works well to enhance drums and percussion. To get maximum effect and that "in your face" sound push the CURVE slider to +50. This increases the Inflator's behavior on the sound to maximum effect but be warned it can drastically change the spectral balance of your mix. Once again experiment with different settings for best results. Below is a clip showing the Inflator being used on a track (produced by Carlisle Young) along with the Waves L3.


Here's a link to Sonnox' website where you can download a demo or purchase the Inflator:
http://www.sonnoxplugins.com/pub/plugins/products/inflator.htm
Posted by Unknown at 7:41 PM