Stereo enhancement plugins are great mixing tools but can cause issues with your mix if used improperly.


Here are a few suggestions on using a stereo enhancer:
1. Always check the mix in mono as stereo wideners wreak havoc on phase. Pay special attention to the low end as it can sound thin and lack punch when the stereo enhancer is improperly set.
2. Use the stereo widener on individual sounds or aux/group busses. I'm not a big fan of using stereo enhancement on the 2-buss/master (but if you do remember tip #1).
3. Use stereo wideners sparingly. Less is more. The contrast between the mono, slightly panned and wide elements is what creates the illusion of a super wide mix. Don't widen every sound just the ones that make the mix interesting.
4. Experiment with using stereo wideners on the efx returns instead of the direct sounds. You can use more drastic settings without the direct sounds losing presence or mono compatibility.
5. Don't pan all your stereo sounds hard left and right. This will give you what we call wide mono and increases the chances of sounds masking each other. Try panning some sounds this way:
LEFT (hard left) -RIGHT (slightly right of center) and RIGHT (hard right)- LEFT (slightly left of center). Experiment with different panpot settings to hear what works best for the song.
6. All sounds don't have to be stereo. Mono sounds take up less space in your stereo field and with proper panning can seem bigger and wider than it would in stereo. (Tip: Pan your mono sounds to one side and it's effects to the opposite side.)
7. Use EQ to make your sounds appear wider by eq'ing the left and right sides differently. If you boost  certain frequencies on the left cut them on the right and vice versa. Make sure to listen and adjust for level differences. I've used this trick many times when mixing on an analog board. It's also a great way to create pseudo stereo sounds out of a mono signal.
8. Use chorus, phasers, short delays etc. to widen the stereo image. This works great on vocals and lead instruments. Pay special attention to the delay parameters a small difference in the left and right delay times can make a huge difference in perceived wideness of a sound.
9. Experiment. Experiment. Experiment.

Most DAWs have stereo enhancers as part of their stock plug-in set (Protools' Air Stereo Width, Logic Pro's Stereo Spread and Direction Mixer pictured above) but one of the most well known is the S1 Imager from Waves Audio. There are other stereo enhancers such as Brainworx bx_solo, Flux Stereo Tool (both of which are free) PSP StereoPack and DrMS Spatial Processor plugins.


As far as hardware enhancers go two of my favorites are the SPL Classic Vitalizer (there's also SPL's high-end Tube Vitalizer which is available as a plugin) and the Behringer Edison. I've used both of these units on many mixes in the past. Another great hardware stereo enhancer is the SRS MW-02 MegaWide Processor.

The SPL Vitalizer, Behringer Edison and SRS MegaWide are discontinued but can be found on Ebay.
A great feature of both the SPL and SRS units are the bass controls which allows you to shape or contour the low end and controls to enhamce the midrange clarity in addition to enhancing the stereo image. The Edison has a built in Phase meter and a Center Distance control which allows you to change the depth of central elements in the mix such as the lead vocal.

Here is a snapshot from an actual session and a review I did earlier of the Waves S1 Shuffler plugin: 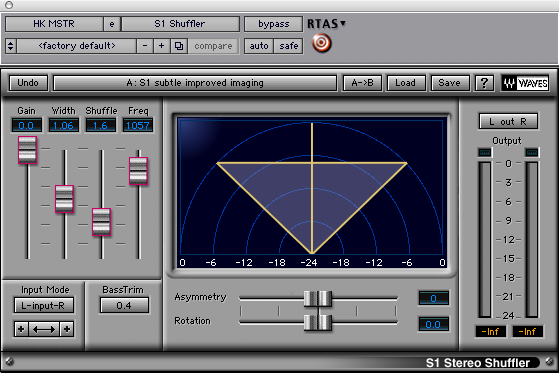 I used the Waves S1 on Estelle's song "Star" (produced by Kardinal Offishall) which is featured in a Crystal Light commercial. The S1 is a spatial enhancer that can be used to correct or improve the stereo image of a mix or group of sounds such as background vocals, synths, strings etc. The S1 has several controls. The gain slider adjusts the overall level of the S1. Width controls how much the sound stage is widened or narrowed. A width of 1= no change, less than 1 = narrower sound stage and more than 1= wider sound stage. Shuffle controls the width of the the bass frequencies. This helps to make sounds appear wider than they really are because if the way our hearing works (we tend to hear bass frequencies as having a more narrow sound stage than mids and highs). A shuffle setting of 1 means no change and 3 is maximum width. Freq chooses the frequency below which the Shuffle will affect the signal. Bass Trim adjusts the level of the bass after the Shuffle has been applied. 0 is neutral. NOTE: Always monitor in mono after making changes with the S1 to check for mono compatibility and phase issues. Asymmetry is useful for altering the far left and right of the sound stage without affecting the center image. Rotation allows you to change the centering of the sound stage without affecting the relative levels of the sounds. (Click and drag in between both faders to move them both at the same time) The input mode buttons allow you to flip the phase of the input channels independently of each other (great for fixing out-of-phase stereo sounds) and also to process M-S (Mid/Side) material. The L out R output button sets the S1 output to L/R (Stereo) or M-S(Mid/Side). For an explanation of M-S see: http://emusician.com/mag/emusic_front_center/

For more info on the the Waves S1 Stereo Imager series visit: http://www.waves.com/Content.aspx?id=275

To purchase the S1 Imager as part of a Waves bundle visit B&H Photo, Video and Pro Audio at: http://www.bhphotovideo.com/c/product/213413-REG/Waves_GNB_Gold_Native_Bundle.html

If you come up with a new/different way of enhancing your stereo sounds feel free to post it in the comments. I will add it to the blog and credit the author.