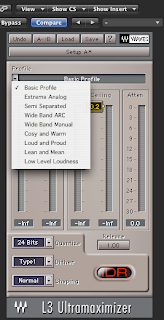 The Waves L3 Ultramaximizer is part of the Limiter Bundle that Waves sells for $350. It's also included in the Platinum & Diamond Bundles at no extra cost and is a scaled down version of its bigger brother the Multimaximizer. The main difference is, you dont have access to the 5 individual bands but there are presets which allow you to change the behavior of the limiter. It does Peak Limiting and Bit Depth Re-Quantization (eg 24 to 16 bit for CD) and is fairly easy to use. But requires understanding how the threshold, ceiling and release work to maximize the level of your mix without destroying it. Before I explain further I want to make it quite clear that I do not advocate the use of this plugin as a replacement for proper mastering by an experienced and knowledgeable mastering engineer. But for a quick CD or mp3 reference, it will do the job.

When using the L3, the first thing to do is set the ceiling to -0.2db. Never set the ceiling to 0db because many portable/car CD and mp3 players will overload and distort. Next, while listening to the audio, adjust the threshold until the audio starts to distort and then back off slightly. 3 to 5 db of attenuation usually works well. In my experience, higher attenuation will degrade the sound. The release should be adjusted in realtime while listening to the material. I find larger release values work for slower tempos and smaller values for faster tempos. But this varies from song to song. Be very careful of your levels going into the plugin. if its clipped on the input it will sound ten times worse after being limited. Use your ears and the Attenuation meters to get the best sound. Last but not least the L3 should be used as the final plugin process on your material.
A good way to implement the L3 and also be able to A/B your song with and without the L3 limiter is to import the song into a new session and duplicate the track. Mute the original track and place an L3 on the insert of the duplicate. After adjusting the parameters of the L3 to get the loudness you desire, un-mute the original and adjust the level of the L3'd track to match it. Once you have both tracks level matched then switch back and forth between each track to see which one sounds better. If the L3 sounds worse adjust the parameters until the sound improves over the original. It's a little tricky since you have to re-adjust the levels as you make changes but it's worth the effort. Because of the way our hearing works we're easily fooled into thinking louder is better but that's not always the case.
Posted by Unknown at 10:18 AM