Lexicon 2400 - One of the 1st. Time Compressor/Expanders 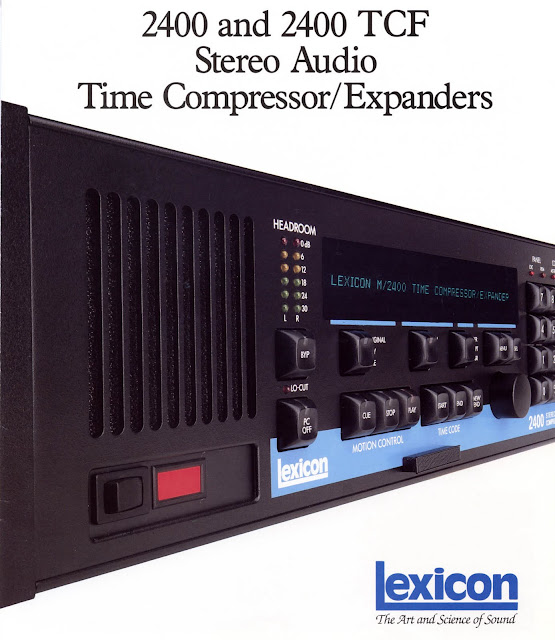 The 2400 was a film and broadcast standard for many years. It was first introduced in 1986 and remained in production for a decade. It has been reverse engineered many times over the years by different companies including Eventide.

The 2400 uses 4 DSP chips for the number crunching that enables it to do time compression/expansion in real time. Nowadays this can be easily achieved in several different ways depending on the software you choose (e.g. Serato's Pitch 'n Time, Waves Soundshifter). Some DAWs even have this capability built in (Protools Elastic Audio, Logic FlexTime). 2 decades ago there were no such choices and the 2400 was one of the best ways to achieve this effect.
The 2400 was used on many Blockbuster movies including "Star Trek V',"Full Metal Jacket","The Hunt For Red October","The Simpsons" and the animated feature "An American Tail" to name a few. It was also used for "jingles" and voiceover work.

There are two versions of the 2400. From Lexicon's press release:
"The 2400 and 2400 TCF are identical in their basic functions which is to provide flawless time compression/expansion without degrading the original program material. The 2400 incorporates extensive machine control capabilities that allow it to act as a master controller. The 2400 TCF was designed specifically for post production and has no machine control but instead slaves to other machines through the use of time code."
You can download the manual for the 2400 here.
Here's a link to a page by the circuit designer of the 2400 - Jon Dattoro. He shares more info about the 2400: https://ccrma.stanford.edu/~dattorro/Lexicon.htm and a current Ebay auction of the Lexicon 2400.
Posted by Unknown at 8:45 AM