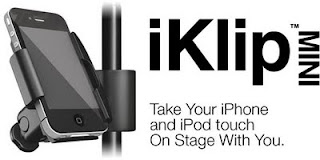 "iKlip MINI is a universal microphone stand adapter for the iPhone® and iPod touch® to support your iOS device on stage, in the studio, at school or in the office. iKlip MINI securely supports your iPhone/iPod touch on any standard mic stand, pole or tripod (with diameters ranging from 11 - 20 mm /.43” - .79”) placed on the floor or tabletop."
"An included detachable bracket supports our popular iRig guitar interface adapter together with iKilp MINI in both horizontal and vertical mounting positions so you can have immediate access to your iOS device multi-touch controls during your live performances with the AmpliTube range of apps or any other guitar effects app"
"iKlip MINI is also the perfect companion to IK’s iRig Mic, the handheld microphone for iOS devices, that allows vocalists and speakers alike to conveniently hold and operate the device at a close distance on the same mic stand with IK’s VocaLive or any other vocal processing app."
iKlip MINI
Posted by Unknown at 7:07 AM