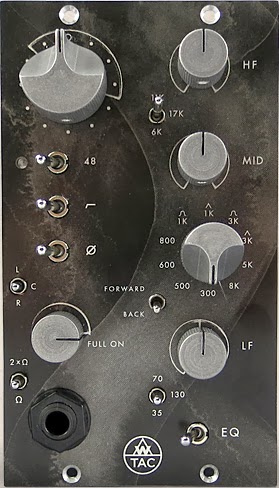 The "Awesome Channel Amplifier" from the Awesome Transistor Amplifier Company AwTAC for short) is unique among 500 series modules because it offers a passive LCR mix buss and an image switch in the Eq section. You can also build a mixer by combining multiple units in a 500 series rack.

"The Awesome Channel Amp has an LCR passive mix buss (left – center- right selectable just like most consoles had up to the late 60′s, no pan pot) in the unit. Since it is a double wide module, we were able to use the extra set of I/O jacks for a mix buss. With a standard XLR cable, you can connect one Awesome into another and *POW* now you have a mixer. Just like that. The buss level, just like the paradigm of all lust worthy classic consoles with a passive buss, is conveniently set at mic level. After you’ve chained all your Awesome’s together, we’ve devised a special (awesome if you will) breakout cable that plugs into the standard XLR jack and delivers the Left and Right buss to the mic pre’s of your choice. This obviously sets you up for a myriad of tonal choices when both tracking with multiple mic’s mixed to a mono source (there are still *some* people that track guitars like this, right?) and mixing your stems (or tracks) from your DAW.


The mixing functionality is designed to work with all (every) 500 rack currently on the market. If it has a male and female XLR, you can use that rack to build a mixer out of Awesomes. Please inquire if you have a rack with TT jacks and we’ll come up with an easy solution for you." 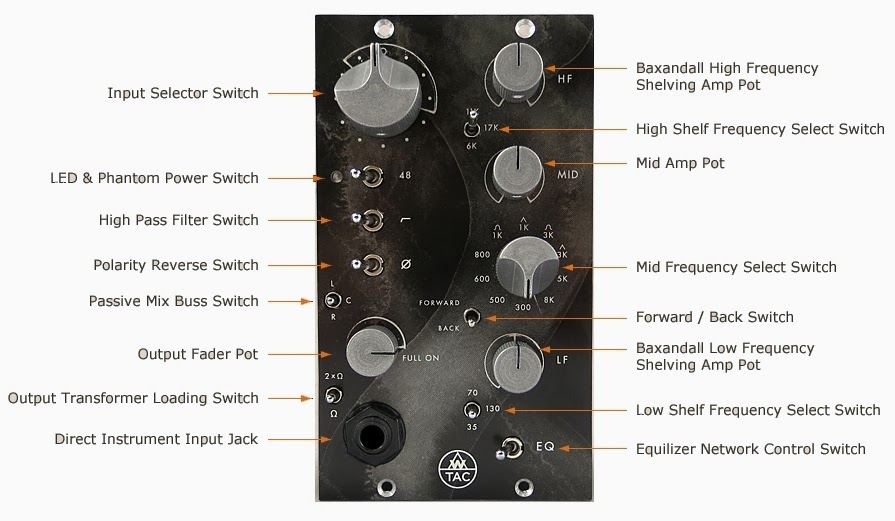 Here are excerpts from a TapeOp Magazine review written by Chris Garges:


"Although there is certainly a general ’70s vibe to the unit, the Channel Amplifier is pretty much unlike anything else I’ve ever used from that period or otherwise. It can have an aggressive, API-like character and frequency response that’s useful on anything, but without the hard-sounding midrange. When driven with more gain, the fuzzy “out- front” character is somewhat similar to a Langevin AM16 [Tape Op #33] (especially with the Image switch set to Forward – more on that in a minute), but the accentuated harmonic content and apparent compression seem similar to a Telefunken V72 to me (especially on distorted electric guitar amps). The inductor-based midrange band on the EQ reminds me of the “large” size that you get from plugging into a Sphere EQ, while the high-frequency band seems to be reminiscent of many of the classic British equalizers of the period. Boost the bottom, and you start wandering into vintage Neve territory, but boost while engaging the gentle high-pass filter, and the bottom clears up in a really nicely- controlled way, allowing for an astounding array of low- frequency tone-shaping possibilities."

"As a standalone amplifier, the unit sounds great. The twelve- position input-gain knob is marked with line-level unity at 12 noon, and it switches from line to mic amp at 4 o’clock. An output transformer loading switch allows for additional tonal options that are varying degrees of different and/or noticeable, depending on the source material. The line amp on the unit is a really nice surprise and sounds fantastic when used as the sole amplifier on most high-output microphones. I’ve been using the line amp on different instruments in a mix with great results, too. Soon after I received the units, I sent a direct bass signal through one of them with the line amp running “right at the edge” of breaking up, and the result was amazing. The recorded DI signal sounded as if I’d used a mic on an amp and a bass with extremely articulate and much newer strings. There was a “shimmery” clarity that the bass had been lacking, and the Channel Amplifier helped situate the bass perfectly in this “big rock mix” without using any drastic EQ or outboard compression. The Channel Amplifier’s mic preamp has a semi- aggressive character that, when run hot, accentuates harmonic complexities. For me, this translates into musicality, much the way that symphonic percussionists are taught to accentuate harmonics with triangle playing technique. I find it tempting to run the mic preamp right at the edge at all times, but the large- ish steps in the gain range make it so that one little surprise in level can overdrive the units easily."

"The three-band EQ is a unique beast. Features-wise, it utilizes a Baxandall-type high and low shelf with three available frequencies each, and an inductor-based mid band with ten available frequency- selection points....the way the EQ works is based completely and totally, 100% on “sound” – and nothing else. As a result, the AwTAC features two 1 kHz and two 3 kHz points on the mid band, each labeled as “wide” and “narrow.” Generally speaking, the bands on these frequencies are all fairly wide. This is not intended to be a surgical-type equalizer at all, but it makes for an extremely effective tone-shaping tool. It’s worth noting that these EQs were meant to be boosted or cut to their full potential, and turning any of those knobs pretty much all the way in either direction works well without falling apart sonically. It just sounds good."

"Totally unique to the Channel Amplifier is the addition of an Image switch in the EQ circuit. This magic little switch provides additional sonic choice to the general tone of the EQ. The options are a full-range, pleasant sound that sits nicely within a mix, or a slightly more assertive sound that helps the signal “jump” to the front. In practice, one might record basic rhythm guitar tracks with Image set to Back, and then cut solos and single note lines with the switch set to Forward. At this point, the quieter single-note stuff steps out from the other guitar sounds without making any changes to guitar, amp, mic, preamp, or EQ settings. Cut lead vocals with the switch in Forward, background vocals with it Back. Make kick and snare drums jump out from the rest of the drum kit. This is a subtle but extremely useful and completely unique feature of the Awesome EQ."

Multiple audio samples of multiple recordings done with various microphones on vocals, piano, drums and guitar can be found on this page.

Take a look at this video that explains how the bussing works on the Awesome Channel Amplifier:

See the full specs on the Awesome Channel Amplifier here.