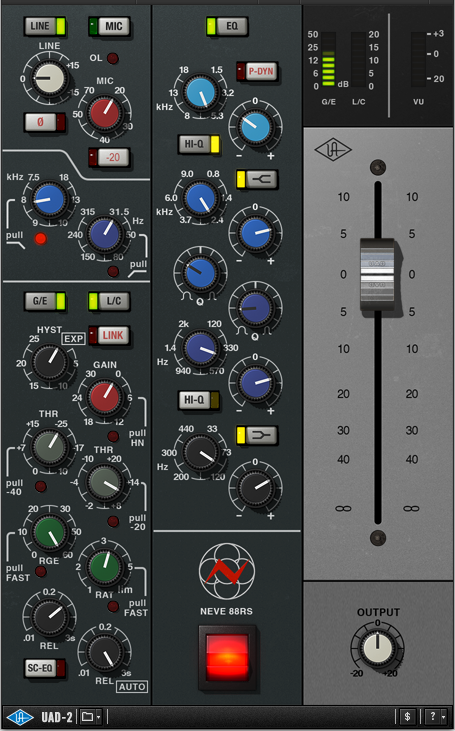 The new UAD 88rs ChannelStrip is quickly becoming a favorite among UAD users. The original now called the legacy version was good but UA has taken the updated 88rs to a whole new level.


The 88rs is based on the Neve 88 Series Large Format Console which "is renowned for its startling depth, airiness, and clarity — deftly encompassing the best of all Neve designs that came before it. Not surprisingly, Neve 88 Series consoles are found in some of the world’s finest studios and scoring stages, including Skywalker Ranch and Capitol.
Now for the first time, you can track through an authentic emulation of this modern masterpiece — complete with its famous mic/line preamp, cut filters, dynamics, four-band EQ, plus post-fader output amplifier — exclusively for UAD-2 hardware and Apollo interfaces." One listen and you know there's some serious audio mojo going on.

I'm currently doing two projects where I use the new 88rs in various ways. It excels on individual tracks as well as aux busses including the master.

The pic above is an actual setting I used for synth bass on a mix I did last weekend at MSR Studios.

Here's a quick tip video from UA showing how to achieve great sound with the new 88rs ChannelStrip Plugin:

I'm considering getting an Octo Satellite and 2 of the new Apollo 8Ps so I can have a virtual hybrid Neve/API/SSL console.

For more info on the 88rs and other UAD plugins or products visit UA's website.