Adele has matched Madonna's record with nine weeks at number one in the UK album chart - the longest for a female solo artist. 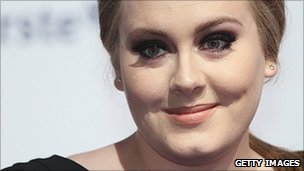 Her second album, 21, has now spent the same length of time at the top spot as Madonna's first greatest hits record, The Immaculate Collection, in 1990.
The Londoner's debut album, 19, remained at number two.
Meanwhile in the singles chart, the singer's track Someone Like You climbed back up to number one.
Last week the song was toppled by Nicole Scherzinger's Don't Hold Your Breath after previously spending four weeks at the top of the chart.
Adele still has two other singles in the top 40 - Rolling in the Deep at number nine and Make You Feel My Love at 36, the Official Charts Company said.
The singer-songwriter is also enjoying continued success in the US, where 21 also regained the number one spot in the Billboard album chart last week.
Earlier in the year she became the first living artist since the Beatles to have two top five hits in the UK single and album charts simultaneously.
Elsewhere in the singles chart, Just Can't Get Enough by Black Eyed Peas rose 12 places to three, while Comic Relief single Gold Forever by The Wanted and former number one Price Tag by Jessie J fell each fell one to four and five respectively.
The highest new entry was Peter Kay and Susan Boyle's Comic Relief single, I Know Him So Well at 11.
In the album chart, The Strokes scored the highest new entry at three with Angels, while When Ronan Met Burt by Ronan Keating and Burt Bacharach went in at number five.
Posted by Unknown at 5:56 AM