Royalties fall for the first time, says PRS for Music 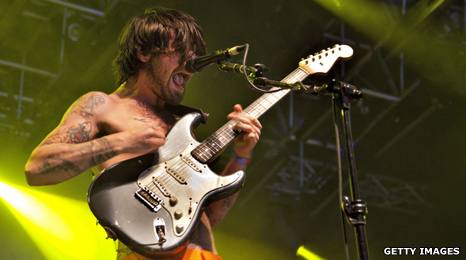 The amount of money artists get from their songs being played in public has fallen for the first time ever.
The Performing Right Society (PRS), which represents 75,000 songwriters, composers and music publishers in the UK, says the amount fell one per cent in 2010 to £611.2 million pounds.
That's seven million pounds less than the year before.
PRS For Music says it's mainly due to a slump in DVD and CD sales, but also the growth of legal downloads has slowed.
'Guaranteed income'
Some artists say they rely on the cash they receive from royalties, especially when they're starting out.
Simon Neil, lead singer of Biffy Clyro, told Newsbeat: "The thing about PRS is for a lot of bands it's the only way you make money.

WHERE ROYALTIES COME FROM

Continue reading the main story
"In our first six years of being in a band that was the only kind of income we had.
"It's the bread and butter for bands. It's almost your only guaranteed source of income."
Robert Ashcroft, Chief Executive of PRS for Music, said: "The loss of high street outlets, the slowdown in physical music sales as well as the difficulty in licensing music usage online has meant for the first time we've seen royalties collected dip."
Even though the dip in royalties being collected is a small one, there's concern it could be the start of a downward slump, possibly putting up-and-coming songwriters and composers from entering the industry.
No sympathy
PRS for Music says more has to be done to develop legal downloading sites so they counterbalance the CD slump and also compete with pirate and illegal sites.
James Claridge, 19, is a music fan in London.
He said: "I like to support the little artists like Bombay Bicycle Club, buy their music to help them out, make them earn a living from it 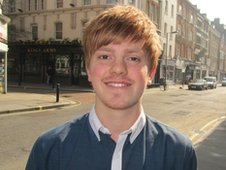 James Claridge, 19, says fans risk their favourite bands disappearing
"PRS is massive for them I'm guessing.
"If you're in a decent band then you deserve to earn good money.
"It could stop young people being inspired by music. If people see you can't make a living, people will stop doing it, then you might stop hearing good music."
But there's no sympathy from others.
One 20-year-old told Newsbeat she hadn't paid for a song in years.
She said: "It's so easy to get it for free now, I could never imagine buying music any more.
"Artists make a lot of money from tours, sponsorships. They get free mobile phones so I don't feel bad.
"If songwriters are that good they'll find a way to make it."
Another 25-year-old said: "I just think they (songwriters) get enough money anyway.
"They get endorsements for example. They are generating revenue from their songs but they do other things to get money."
Posted by Unknown at 6:01 AM