Calling All Artists, Whoever You Are

It would be easier to count up all the squirrels in New York City than the artists who live here. But that's not stopping a new cultural think tank, the Institute for Culture in the Service of Community Sustainability, from trying.
In 2008, the New York City Occupational Employment Statistics, provided to The Wall Street Journal by the state's Department of Labor, officially tallied 1,200 fine artists, 1,470 dancers and 5,820 actors. But these numbers, and others used by city policy makers, constitute a gross underestimation, according to the ICSCS.
View Full Image 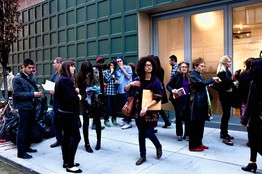 Philip Montgomery for The Wall Street Journal
Art lovers gather outside the Andrea Rosen Gallery on West 24th Street. How many are artists in their own right, and how does the city know? 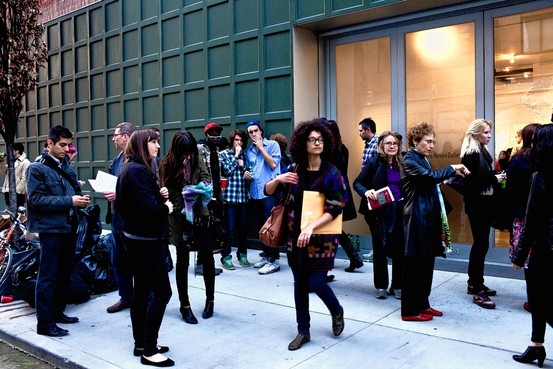 Does it matter if there are actually far more working artists than the city knows about? According to ICSCS Executive Director Paul Nagle, it does. Accurate data, he said, tells a different story about the economic impact of the arts and will help influence policy decisions more favorably in matters concerning health insurance, city planning, and small-business incentives. But, Mr. Nagle said, this isn't simply about getting more for artists. "Urban competitiveness depends in part on the creative sector, so it's about how we can make the city stronger." He noted that groups in other states, like Minnesota and Massachusetts, have initiated artist census projects.
One root of the miscalculation, he noted, is the practice of counting only those artists whose primary income is derived from making art, thereby excluding a great—but as yet unaccounted for—number of working choreographers, playwrights, sculptors and so forth, whose earnings largely come from outside the arts. James P. Brown, the principal economist for the New York State Department of Labor, defended the practice. "Most people active in an artistic field are making enough money doing so, or else they wouldn't be able to do it," he said.
Not so, said choreographer Mark Morris, who has made New York the headquarters for his international dance company for 30 years. "There are about 35 of those," he quipped, before arguing that the work and impact of artists not living primarily off their art wages should be counted. "They are doing a job. But of course they have other jobs. They teach yoga and waitress and kill themselves to take classes and make shows."
Some believe the government simply lacks a certain artistic ingenuity in conducting the count.
"It would be wonderful if the Department of Labor had a mandate to be creative here," said Sara Horowitz, the executive director of the Freelancers Union. She cited a second source for the low artist count, a conceptual "misunderstanding of the gig economy," and explained that when the Bureau of Labor Statistics makes employment inquiries, it asks individuals if they're working or not working, which presupposes a traditional 50-week, 9-to-5, seven-day work schedule. "And if you think artists work like that, you're crazy," Ms. Horowitz said.
The fashion and music entrepreneur Russell Simmons agreed. "If they don't understand the numbers, they don't respect it, and they don't nurture it," he said. "And when you undermine art, you undermine the future of the world and every human being."
Mr. Simmons articulated an almost boundless definition of "artist." "To me, everybody is an artist," he said. "How many kids rap all day long? How many spoken word poets are there?"
But that's precisely the problem, as Mr. Brown sees it. "Potentially, everyone's an artist," he said. "If you're trying to write a novel, congratulations, you're an artist. Where do you draw a line?"
Ms. Horowitz agreed here, noting that while anyone has the freedom to self-identify as an artist, "it's not enough for government policy." She called for the creation of a "nimble" definition based on hours of work and income, so that each artist's "tie to the field" can be evaluated.
Even if everyone could agree on what makes an artist, the process of locating them has yet to be determined. Will officers be trained to ferret them out of master dance classes, coffee shops, factory lofts and black-box theaters? The ICSCS's first step, funded in October with a two-year Rockefeller grant, involves initiating a "conversation with the community" both locally and globally about the "who" and "how" of counting artists—after which the actual counting will commence.
According to Mr. Brown, it's a bit of a fool's errand. "You can always make the case that we're not capturing everybody, but I don't think it's systemic or that different from other fields with a lot of self-employment," he said. "The intent is to measure what's actually happening, but it's never going to be perfect."
On that last bit perhaps all parties would agree.
Posted by Unknown at 6:45 AM