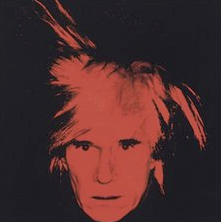 An Andy Warhol self-portrait completed shortly before his death is expected to sell for up to $40m (£24.3m) at a New York auction next month.
Painted in 1986, Self-Portrait was among the last to be exhibited before he died after routine surgery aged 58.
The red-on-black piece, measuring nearly 3m per side, is considered a landmark work by the American pop artist.
The painting wil go under the hammer on 11 May.
Of the large self-portraits Warhol painted in 1986, the other six are all in museums or in collections.
"It is a rare event that a work of this grandeur and stature comes to market," said Amy Cappellazzo of Christie's.
"With all the other examples in museums, it will be the last chance that buyers will have to bid on a work that shifted art history."
The current record price for a Warhol self-portrait is $32.6m (£19.8m) set last May in Sotheby's in New York.
In February another self-portrait of the artist sold for £10.79m ($17.44m) at Christie's in London.
Posted by Unknown at 5:08 AM