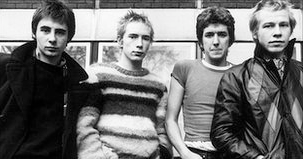 A rare recording of God Save the Queen by the Sex Pistols has been named the most valuable vinyl disc of all time, with experts saying it is worth £8,000.
The single was originally produced by A&M Records. But the group were dropped before it was released and most of the copies were destroyed.
Record Collector magazine have compiled a list of the 51 most collectible vinyl records.
The Rolling Stones and the Beatles both feature in the top five.
"There is something of an investment market in mint-condition copies of iconic albums," said Record Collector editor Ian McCann.
"The problem is people love them and play them to death, making it increasingly rare to find them in mint condition."
The Beatles' Please Please Me on the Black and Gold label is ranked in second place with an estimated value of £3,500, while the Rolling Stones self-titled debut record from 1964 - valued at £1,000 - is fifth.
Between them on the countdown are jazz saxophonist Hank Mobley's self-titled album from 1957 and rocker Wil Malone's own self-titled release from 1970.
Posted by Unknown at 5:11 AM