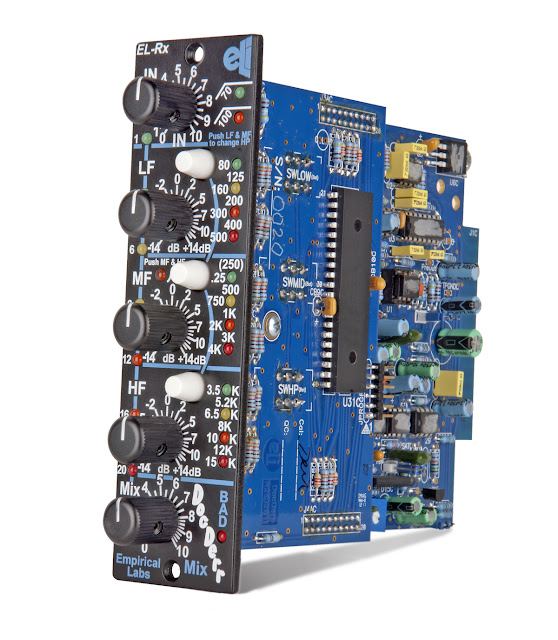 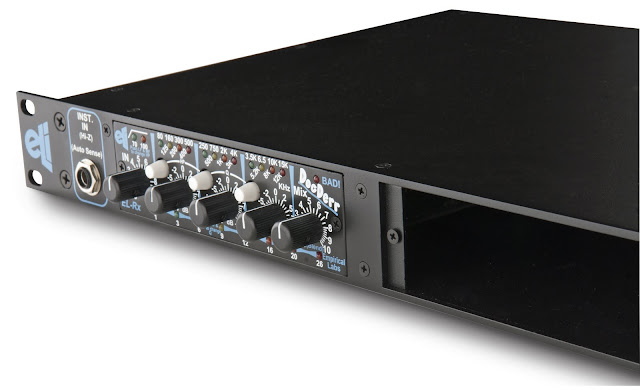 I'm a big fan of Empirical Labs and use their products every chance I get. They recently announced a new 500 series channelstrip module appropriately called the DocDerr. It's available in both vertical and horizontal styles. The circuitry is identical in both only the front panels are different. I want two of these.

A super low-noise preamp capable of line or 16 dB of “instrument” gain is followed by four sections of EQ offering one selectable high pass and three parametric bands. The dynamics section provides renowned Empirical Labs compression at an unprecedented price, as well as a tape emulation circuit to soften high frequencies and clips. A “Mix” knob allows the user to blend the uncompressed EQ’s signal with the compressed and saturated signal. Inputs and outputs are DC coupled, and the output can be switched between single ended or differential, yielding + 6dB of gain. A “Bad!” hard clip indicator monitors most every section for internal clipping.

“I couldn’t be more delighted with this piece,” says ELI founder and designer Dave Derr. “It has an interface and feature set unlike anything else on the market.”

The DocDerr model EL-Rx will be available with either horizontal or vertically oriented front panel configurations, and begins shipping July 2011.

Empirical Labs Inc. (ELI) is a New Jersey-based company that designs and produces professional audio equipment and software for creative professionals. ELI products are made with one simple philosophy that drives the company and continues their success: “We want to make products that work a little easier, a little better, and a lot longer - and make sure they are fun to use."
Here's an excerpt from the DocDerr manual which explains the dynamics section in more detail:
"The INPUT KNOB is the compressor’s main control (not counting the MIX control), which affects how much compression, is put on a source. The INPUT Knob follows the EQ, and drives signal into the compressor, scrunching the dynamics and peaks into an increasingly narrow range. The time constants and the curve of the compressor were selected to be as aggressive as possible without crackly unmusical distortion. The ratio is about 5:1. With an attack under 1mS, it could be considered a limiter. Above about 8 – 10dB of compression there will be saturation caused by fast time constants working on each peak of the waveform. We think it sounds very “tubey”, with nice harmonics added at high gain reduction… but, it IS a form of distortion, and it will get more prevalent with more gain reduction. Many of the classic old compressors from the 60’s and 70’s were valued for this fat distortion. One can tame any saturation by turning down the input knob, thereby turning down the compression, OR, by adjusting the MIX control to include more of the uncompressed (dry) signal in the output. When using the MIX control, the user may find they can put on tons of compression (up to 20dB), and still get a very natural sounding instrument or voice. By judiciously mixing the compressed signal under the dry signal, the sustain and note detail will come out without feeling squashed. Modern mixdown engineers use this “blend” technique all the time, but have to split the signal going to a compressor and then return it to submix the dry and compressed signal on their mixing console. For the first time, the common live instrumentalist can use this advanced compression technique just by turning a knob."

The DocDerr will be available soon. You can pre-order it from various dealers including Alto Music
MSRP $799