UA has announced the release of the Fairchild Tube Limiter Collection with their v7.4 software update. I use their legacy Fairchild plugin often and look forward to hearing what the new version has to offer. The Side-Chain Filter, Headroom Adjustment and Wet/Dry Mix knob are all welcome additions.
The Fairchild is one of the most sought after compressor/limiters and has been used on many classic records over the years.

Here's a little background on the Fairchild from the UA website:

"The very first Fairchild limiter that audio genius Rein Narma created on Les Paul’s kitchen table transformed the sound of recording forever. Soon, these 20-tube, 14-transformer, 67-pound behemoths were embraced by world-class studios, many of which still employ their vintage Fairchilds despite the increasing difficulty in maintaining these tube-driven tone machines.
For a half-century, the Fairchild 670 — and its aggressive little brother, the Fairchild 660 — have defined popular music’s most revered vocal and drum sounds. In fact, the world’s elite mixers often employ a 670 simply for the “glow” it brings to their final mixes, even without the compression circuitry engaged."


Read my previous post on the UAD Fairchild 670 plugin where I share info and settings I used on a song I mixed for Ricky Martin. 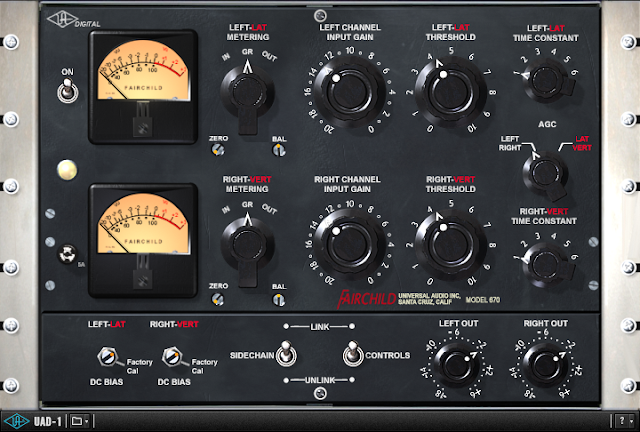 The 7.4 software update also includes the Maag EQ4 plugin which is known for its amazing top end response.
The words "airy, silky and transparent" are often used to describe the EQ4.

"In a quest for “audio perfection,” Cliff Maag designed the EQ4 to provide unparalleled transparency and top-end presence while maintaining a true, natural sound. Based on his classic — and long-discontinued — NTI EQ3 from the ’80s (which I've used in the past), the EQ4 features Maag’s legendary Air Band control, a major component to the vocal mix chain on Madonna’s Ray of Light as well as Celine Dion’s Taking Chances.
Designed in conjunction with Brainworx, the Maag EQ4 Plug-In is an expertly rendered emulation of this modern classic EQ for your UAD-2 DSP Accelerator or Apollo-equipped workstation."

Visit UA's website for more info on their latest software update and plugins.