Waves is currently having a sale on many of their plugins including the C4 which is one of my favorite plugins for processing vocals.

Download over 70 free custom C4 presets for vocals, drums, bass, guitars, problem-solving, mastering and more, direct from some of the hardest working engineers in the business.

Here is a review i did previously on the Waves C4: 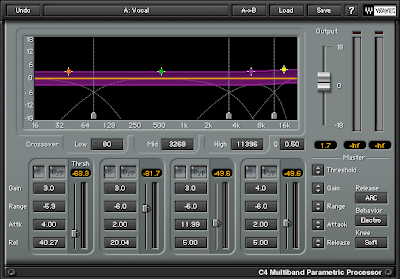 I used this for Joss Stone's hook on "Young At Heart" produced by Salaam Remi for her album "Mind Body & Soul".


The Waves C4 Multiband Parametric Processor is a versatile plugin that's included in the Platinum, Diamond and Mercury bundles. It's transparency and flexibility has earned it a prominent place in many engineer's toolbox. To quote the manual "You can think of the C4 as a dynamic equalizer capable of gentle compression, expansion, limiting and EQ, independently and simultaneously."
The C4 can be used on the stereo buss, group auxes or even individual tracks. It works exceptionally well for vocals where I usually place it on the aux master for the backgrounds.


The C4 is complex but it's interface makes it fairly easy to use. The controls (see pic) consist of Threshold, Gain, Range, Attack and Release for the four individual bands and a master controls that affect all bands at once (right side of interface). I especially like the solo and bypass for each band that allows you to zero in on any problem frequencies with ease. The Threshold works in conjunction with the Range control in that the amount of gain reduction is half the range value (-6.0 Range means -3dB reduction). The gain control allows one to adjust the output level of each band independently. The Range control serves a dual purpose. When the values are negative(-) it's a compressor when the values are positive(+) it's an expander. The attack and release behave the same as a standard compressor.
The master controls will change all the values at the same time so the interaction between the bands will not change. On the far right of the interface we have the Release, Behavior and Knee controls. The Release allows one to choose between Waves ARC (Automatic Release Control) and manual. The ARC works best in most situations.


The Behavior control lets you choose between Electro and Opto compression (similiar to the Rennaisance Compressor). Electro has slower release times at higher compression settings and Opto (think LA-2A) has faster release times at high compression. The Knee control can be set to soft or hard or values in between if needed. The crossover points can be changed by dragging the small grey handles at the bottom of the display or clicking directly on the Low, Mid, and High value boxes and entering the numbers with the keyboard or mouse. The Q (bandwidth) setting is global.
(Waves tip: For “tighter” sound, adjust the Q to a higher setting.) Finally the output fader sets the final output of the C4.
Posted by Unknown at 10:47 AM