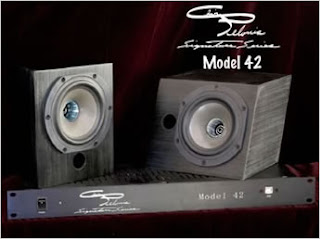 Acoustic designer Chris Pelonis has begun shipping his highly anticipated Model 42 professional monitoring system. Designed from the ground up to reflect the exacting performance standards associated with the Pelonis name, the Model 42 delivers incredibly accurate detail and imaging along with an amazingly musical sonic signature at a price point accessible to engineers, producers and music lovers at all levels ($999 MAP).

The ported cabinets feature a striking, innovative rhomboid shape that allows for effortless comprehensive placement, as the inward angle of the front face ensures that the drivers are aimed correctly – they can even be angled up or down! The state of the art concentric 100mm (4”) multi-fiber woofer encircling a 19mm (0.75”) titanium dome tweeter assures the most accurate time domain response of any design, providing a frequency response of 75 Hz-35kHz (±3dB). The bi-amplified system is powered by four 100w amplifiers specifically designed for the Model 42, which are housed in an external module along with audiophile grade active crossovers.

Free software allows for the system to be fine tuned via USB for optimum performance in any environment. A matching subwoofer system designed to flawlessly extend the Model 42’s bass response will be available before the end of 2011.

With over a quarter century of experience and a list of high profile clients a mile long, Pelonis Sound and Acoustics is a full service company dedicated to excellence in the field of studio design and consultation, acoustic analysis and measurement, construction and installation solutions for recording studios, multimedia production facilities, performance venues, places of worship and theaters.
Posted by Unknown at 11:45 PM No comments: 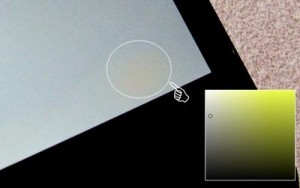 Some iPad 2 owners have reported receiving new units with backlight issues, dead pixels and yellow tinting in LCD or backlight bleeding. These problems are being reported from various news and websites. A slight yellow discoloration of the iPad 2′s screen the same issues was affected with the iPhone 4 early on in production.
Some users are also reported that a dark image on loaded, and this leaking around the edges of the screen. The light leakage can be stopped by lowering the brightness of the display but this is not a perfect way to fix this problem. That not means its okay for Apple to ship faulty products in the first place.
While yellow tinting is normal and will dissipate as the glue from the factory dries, those dead pixels aren’t going to disappear over a certain time period.
Early experienced with products iPhone 4 units have same problem then the bonding agent Apple uses called Organofunctional Silane Z-6011 to bond the layers of glass. Apple has stated that “after one or two days of use, especially with the screen, and will complete the evaporation process and the yellow “blotches” will disappear.”
Posted by Unknown at 8:49 PM No comments:

Get Your FREE Devil-Loc Plug-In from SoundToys

Essentially a distorting compressor but so much more, it's really quite simple but also a bit supernatural. Because the release time of the compression is effected by the input level (like the Level-Loc) it's a bit hard to predict exactly what will happen the first time you work with it. Luckily with just two knobs, you can find the magic spot for your track fairly quickly and you'll be going for that sound more and more. Don't be fooled by it's simple front panel, this plug-in has a lot more cool sounds than you'd expect out of two knobs. Get crushing kick drums, to almost rhythmic level sweeps with the crazing sucking compression, to blitzed out blasting beat loops. Drive it hard and you get straight hardware sounding break-up and drive.
Go here for your free code https://www.soundtoys.com/sxswpromo/&rc=311-0817-299
Posted by Unknown at 8:02 PM No comments:

The Seventeen X is a one channel transformer coupled compressor/limiter. It's a FET (field effect transistor) design that incorporate some new and exclusive features such as "High Pass Sidechain Filter", "Mix Knob" mix between dry and wet signal (parallel compression), "Signal High Pass and Low Pass Filters" smooth 6db/oct filters that colors the sound nicely.
The 17X uses the absolute best parts available: Alps pots, Carnhill Transformers, Wima Caps, Sifam Vintage VU, Original Fender Super Switches, Gold plated XLR's, etc.
The 17X is our take on the classic "1176 Sound". It can be smooth or it can be a rock'n'roll monster when using ratio 100:1 (all in). Please have listen to the sound examples below.
The 17X is a joint venture between producer Tobias Lindell (Lindell Audio, Studio Bohus) and IGS Audio.

Posted by Unknown at 7:36 PM No comments:

An online petition to pull an app from iTunes targeted at “homosexual strugglers” has reached 20,000 signatures.
Apple has not commented publicly on whether it intends to pull the app from Christian group Exodus International and did not return Cult of Mac’s request for comment.
Last November, Apple removed an app called the Manhattan Declaration from the iTunes store after outcry and over  7,000 signatures on an online poll that the content was an anti-gay and hate-mongering. The app makers asked to have it re-instated to no avail.
The group behind the latest petition, Truth Wins Out, has also asked Apple to intervene but received no response. Signers of the petition more than tripled since our last post on the Exodus app.
They issued the following statement: “If Apple continues to bury its head in the sand, we will hold a press conference in front of their offices featuring sexual and spiritual abuse victims of “ex-gay” programs.”
Posted by Unknown at 12:29 PM No comments:

by Craig Anderton
Because Reason doesn’t accept external plug-ins, you can’t use conventional guitar amp simulation software within Reason. However, Reason is sufficiently flexible that you can construct a guitar amp/cabinet simulator using only two of its available processing modules - here's how.
1. Go to the Create menu, and select Dr. Octo Rex Loop Player.
2. Click on the Dr. Octo Rex folder button (Browse Patch), then choose a dry guitar as a signal source for testing the amp sim we’re about to create. A good choice is the ElGt_Faith_G_085.rx2 guitar loop. To find it, navigate to the Reason Factory Sound Bank, then go Dr. Rex Instrument Loops > Guitar Loops > Telecaster Rhythm 085 BPM.

3. Make sure Enable Loop Playback is on.

6. Hit Tab again to return to the front panel. Click on the Dr. Octo Rex “Run” button so you can hear the loop play.

7. Guitar cabinets don’t have much highs over 5kHz. Enable the MClass EQ high shelf, set Frequency to around 5kHz, and to add a little resonance, set Q around 1. Set Gain to minimum. This rolls off the highs and produces a little “bump” around 2kHz.

8. In Scream 4, enable “Body.” Types A, B, and C are different guitar cabinet types; Scale chooses the size, with clockwise settings giving smaller cabs. For now, set Type = C, Reso and Auto = 0, and Scale between 100 and 127. Note that in the Body section, the Auto parameter adds an envelope follower effect. While it doesn’t contribute to a more realistic guitar amp sound, it can provide some cool effects if you’re not concerned about “authenticity.”

9. In Scream 4, enable “Damage” and choose the type of distortion characteristics you want. The Damage Control parameter has a huge effect on the sound, so experiment; the settings shown in the screen shot give a strong overdrive sound, but also try the Distortion, Fuzz, and Tube algorithms—varying P1 and P2 to optimize—for more distorted effects.
After choosing your distortion algorithm, re-visit step 8. Changing the Type, Scale, and Reso parameters let you “customize” your cabinet for the chosen type of distortion.
And that’s all there is to it - aside from tweaking it to optimize the sound to your liking. Enjoy your amp sim!
Posted by Unknown at 11:28 AM No comments: 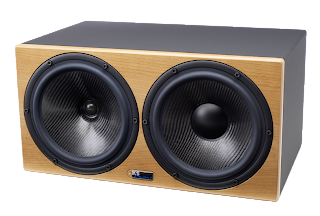 Posted by Unknown at 7:55 AM No comments:

The Summit Audio TLA-100A Tube Leveling Amplifier is a classic design with a technological hybrid of vacuum tube and solid state devices. The harmonious blend of old and new technologies produces the incredibly warm and smooth sound of vacuum tubes in a compression device that does not have the inherent disadvantages of older designs. Summit Audio has been making the TLA-100A for over 20 years and produces a sound that remains a much sought after quality that is used on literally thousands of records and in live sound venues across the world.
Posted by Unknown at 7:54 AM No comments:

Posted by Unknown at 6:39 AM No comments: