iAm-K3m for Logic's EXS24 and Kontakt. A sample based synth.

The K3m is a hybrid digital/analog synth produced in 1986. It uses an 8 bit wavetable for the oscillators and has analog filters and VCA. It also has a very lush stereo chorus!
This synth was recorded through various tasty bits of studio hardware... things like the UBK Fatso, Great River Harrison EQ32, A-Design EM-PEQ.
What you get is a sample based instruments bursting with character, digital grit and analog warmth. You will find musical inspiration and sonic adventures waiting to be incorporated in your next track...
Contains 116 patches for EXS24 and 122 patches for Kontakt. Including all the wave oscillators from the wavetable and a set of drums and FX synthesized on the K3m.
Posted by Unknown at 9:46 PM No comments:

AT&T just bought T-Mobile USA for $39 billion so there are now only three major mobile carriers in the US – AT&T, Verizon, and Sprint.
Both carriers use the same technologies: GSM, HSPA+ and LTE. AT&T Mobile will become a monopoly for GSM cellular services in the US.
This doesn’t bode well for consumers who will now only have one GSM carrier to choose from and one less carrier for anyone to choose from.
AT&T will become the largest US cellular carrier surpassing Verizon by a nice margin based on an estimated number of subscribers at Verizon as 94 million. Purchasing  T-Mobile will add about 34 million subscribers to AT&T’s 96 million creating a subscriber base of approximately 130 million for the combined carrier.
It also looks like T-Mobile subscribers will finally get a chance at owning an iPhone. In the last few months, the iPhone has gone from one carrier to all the major carriers except Sprint.
Posted by Unknown at 3:29 PM No comments:

Here are some interesting numbers, collected from a variety of sources, that help one to understand the volume levels of various sources and how they can affect our hearing.

NOTES:
Posted by Unknown at 1:56 PM No comments:

SPL Transpressor - Transient Designer and Compressor in one.

The Transpressor is the first processor that combines the two most important dynamic processing techniques: compression and level-independent treatment of transients. By blending these techniques in a single path, SPL aims to void the previous limitations of dynamic processing.
A transient can be defined as the first impulse of a waveform. What the Transient Designer does is shape the waveform according to the transient, and it only needs two controls to achieve that, either by amplifying or attenuating the attack and/or sustain. Among its most common uses are the sound shaping of percussion instruments, the attenuation or intensification of stringed instruments or vocal consonant transients, etc.
The compressor is based on our tried and true Twin Core Circuit with incredibly low distortion ratings. It includes all standard parameters like Threshold, Ratio, Attack, Release, and Make-Up gain. Moreover, the attack and release parameters can be adjusted automatically according to the input signal – sort of like a cruise control.
There is also a bandpass filter for the mids and two low pass filters for the lows that allow for a much more focused compression of specific frequency ranges or instruments. A side chain input allows for external control of the compressor while a Dry/Wet control determines the balance between the original and the processed signal.
The Transpressor is designed as a single channel unit but you can always couple two in order to do some stereo processing. Our intent to offer a flexible and powerful audio processing tool, based on the interaction between transient processing and compression, is made evident by the freedom to place the modules in any order in the signal path. That way you can compress attacks that have been heavily amplified by the Transient Designer more precisely or enhance the transients once they have been compressed.
Here's a video of the Transpressor in use. (Long intro so skip to 2:10)
Posted by Unknown at 1:36 PM No comments: 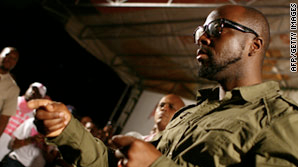 Hip-hop singer Wyclef Jean was recovering Sunday after he was shot in the hand, his publicist said.
Spokeswoman Cindy Tanenbaum said Jean, who was in Haiti, was shot in Port-au-Prince on Saturday -- on the eve of the country's presidential runoff vote.
The wound was superficial, she said.
The singer was taken to a hospital, treated and released.
"He is doing well," Tanenbaum said.
Haitians are choosing between a former first lady and a popular musician Sunday in the pivotal presidential runoff vote for a nation still recovering from a devastating earthquake and political turmoil.
Former law professor and first lady Mirlande Manigat faces singer Michel Martelly in the second round of presidential elections.
Final results of the runoff will be released on April 16, according to officials.
Jean, who was born in Haiti, shot to fame in the mid-1990s as a member of the Fugees, a U.S.-based hip-hop and reggae group. He now performs as a solo artist.
He has been an outspoken proponent of Haiti through his Yele Haiti Foundation and was one of the first celebrities to offer aid after the earthquake.
In September, he officially ended his bid to be president of Haiti a month after election officials ruled that he was ineligible to run.
Jean previously vowed to fight the Haitian electoral council's ruling that he was not a resident of the country.
His eligibility had been in question after claims that he had not lived in Haiti for five consecutive years prior to the election, a requirement in the nation's constitution.
Posted by Unknown at 9:01 AM No comments:

Posted by Unknown at 8:48 AM No comments:

The Inward Connections DEQ-1 is an in depth stereo parametric equalizer, designed for mastering purpose. The studio that I work at has a mastering room on site where we've got the DEQ-1 as the main outboard EQ. I don't know the types of connections that it has in the back since ours is permanently hooked up within a chain and I've never had to move it for any reason. It is rack mountable and will take up four rack spaces.
Utilization

The Inward Connections DEQ-1 is made up of six EQ bands, each with a great deal of control available. The two outer bands are high and low pass filters which can be turned on or off independently, while the middle four bands each have parameters for gain (12 db of room), frequency, and a band width control. Those who know the ins and outs of parametric EQ's should be able to handle the DEQ-1 rather easily, so I don't think a manual is necessary.
Sound Quality

The sound of the Inward Connections DEQ-1 is unlike any EQ that I've heard before. It's extremely clean and precise and you can pretty much do anything you want with it if you know what you're doing. Of course it takes a highly trained mastering engineer to have complete control over this, as I'm not one myself. This could be used for mixing, but at the price it's not worth it for anything other than a go to mastering EQ. Even if you're not a mastering engineer, the DEQ-1 is still just a parametric EQ and is easily manipulative if you know what you're going for.
Overall Opinion

The Inward Connections DEQ-1 is really the ultimate mastering EQ. It's no longer being made and I don't think too many of them were made to begin with since it's so expensive. You can still probably get your hands on one however if you're really determined and have a ton of money, as you would need even if you were to buy one new. That being said, the DEQ-1 is going to be a huge help in any mastering situations.
Posted by Unknown at 8:23 AM No comments: 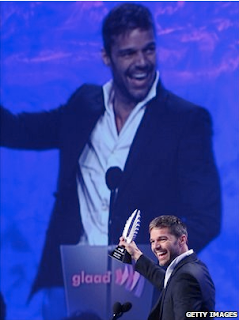 Pop singer Ricky Martin, music mogul Russell Simmons and HBO TV drama True Blood have won awards from the Gay and Lesbian Alliance Against Defamation.
The annual Glaad awards ceremony in New York hailed Martin for appearing on The Oprah Winfrey Show to discuss his decision to come out as gay.
The Latino singer also spoke of life as a single working father of twin boys.
Other winners included NBC comedy 30 Rock and CNN's Anderson Cooper 360 for its series on gay teen suicides.
The awards recognise fair, accurate and inclusive representation of the lesbian, gay, bisexual and transgender community and the issues that affect their lives in the media.
Simmons, who co-founded the hip-hop label Def Jam, received the Excellence in Media Award while pop band Scissor Sisters were named outstanding music artists for their album Night Work.
Peter David won a prize for his Marvel comic book X-Factor while Winfrey's O magazine article, What Happens When You Find the One... And He's Nothing - Nothing - Like You Expected?, was also honoured.
The website Essence.com won its prize for outstanding digital journalism.
Winners were revealed in 25 of this year's 32 media categories. The remaining awards will be presented at ceremonies to be held in Los Angeles and San Francisco in April and May, respectively.
Posted by Unknown at 5:00 AM No comments: