"The Unicomp audio compressor combines the best features of both modern and classic audio compressors into a single, dual-mono unit. At its heart is a unique gain cell/sidechain combination which gives the Unicomp its own distinctive sonic character. The Unicomp’s comprehensive set of sidechain features gives it true versatility and accuracy which make the unit superbly suited for tracking, mixing and mastering applications."


http://www.altamodaaudio.com/unicomp.html
Posted by Unknown at 6:37 PM No comments:

The Juggernaut Twin is a two channel 1RU (19" outboard rack unit) class A discrete, transformer switchable, impedance selectable Mic Pre and D.I. which is an expanded version of the Juggernaut 500 preamp. It's a very versatile unit which provides a multitude of sonic options.

Posted by Unknown at 6:33 PM No comments:

The LT-381 is a high-performance vocal microphone that produces incredibly full and detailed recordings.


"It features a variable polar pattern selector allowing you to choose omnidirectional, cardioid and figure-8 as well as six intermediate positions. This variable pattern selector provides the ability to achieve many variations of sound characteristics. The rugged vintage style external power supply houses the polar pattern selector and supplies a consistent voltage to the microphone to achieve optimal performance. There are two features designed to reduce vibrations and noise. First, the capsule is internally shock mounted. Second, each microphone has a custom heavy-duty shock mount that securely holds the microphone and reduces external vibrations and noise."

and it can be purchased from Sound Pure at  http://www.soundpure.com/p/lauten-audio-oceanus-lt-381-microphone/2397
Check out Sound Pure's video showcasing the LT-381 which also shows some great miking techniques.

Posted by Unknown at 4:51 PM No comments: 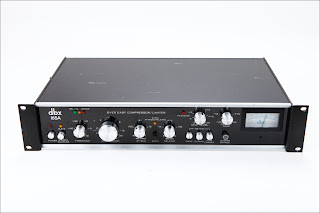 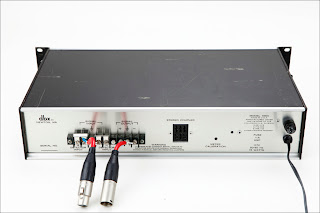 I used the DBX 165A on Lauryn Hill's "Sweetest Thing" remix produced  by Salaam Remi.
The DBX 165 is a solid state compressor/limiter with VU metering and like other dbx compressors is known for its 'over easy' trademark compression sound. It can be transparent even when applying a significant amount of compression. You can also link two together for stereo use -
The controls are: Power, Stereo Coupler, Threshold, Compression, Attack, Release, Auto Switch, Meter Function, System Bypass, Peak Stop and Output Gain.
The Stereo Coupler switch determines which unit is the Master or Slave. When the switch is in and the LED is on the unit is in slave mode. All controls are controlled by the master unit except for Meter Function and System Bypass.
The Threshold has 3 LED indicators. The green LED shows signal below the threshold. The amber LED shows signal at the threshold and the red LED shows signal above the threshold.
The Compression knob has a range of 1;1 to Infinity. Compression ratios of 10:1 and higher are considered limiting.
The Attack and Release have a very wide range and can be used in Auto mode most of the time. The LED between the knobs light up when Auto mode is active.
The Meter Function allows you to quickly compare input, Output and gain Reduction levels to ensure proper gain staging of the 165A.
The System Bypass bypasses the entire unit for easy comparison of  the raw and compressed signal.
The Output Gain sets the output level of the 165A. It can boost or cut up to 20db. It's best to start off with the knob set to unity gain (0) then adjust as needed.
The peak stop is basically a limiter and is last in the chain of  processing done by the DBX 165A. It is not a brickwall limiter but uses more of a soft knee approach.It works well to control the absolute output level of the unit. This allows you to set the other controls to acquire the desired compression and still control any large transients that may occur (works great on drums). The range of the peak stop knob is -2 to +24db which is the maximum output level of the unit. To turn off this function turn the knob to +24db. The red peak stop LED lights up whenever peak stop is activated. The combination of DBX's Over Easy (soft knee) compression with the Peak Stop feature gives a very smooth but controlled sound.

The connectors on the rear of the DBX 165A are known as barrier strips. With a special connector for the Stereo Coupler. The XLR adapters seen in the above pic were commonly used to connect the unit.

The DBX 165A works great on drums, bass and vocals and can be used for both tracking and mixing duties.

Posted by Unknown at 6:08 AM No comments: