The Lowender and DBX 500 featuring Spragga Benz and Mack Wilds. 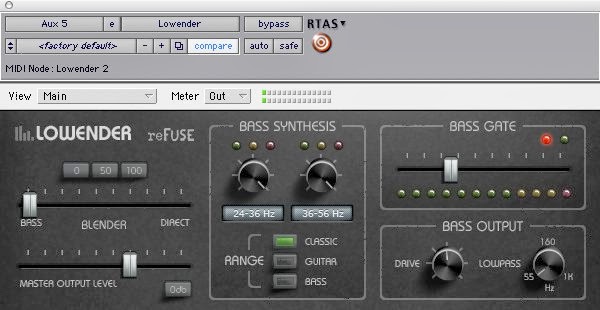 In my recent post on low end enhancement I neglected to mention 2 things that I use to enhance the low end on some of my mixes; The Lowender software and the dbx 500 hardware.

Refuse Software's Lowender Bass Synthesizer was used on Spragga Benz (@SPRAGGABENZ3) "Shotta Culture" album produced by Salaam Remi (@SaLaAMReMi) and recorded by Frank Socorro (@Alphabeatmusic). I used it on the mix of "Duppy No Frighten Vampire".
The Lowender Subharmonic Synthesizer ($69) by Refuse software @refusesoftware is a plugin that "creates new bass content from your existing audio material." It's very similiar to the dbx 500 which I covered in an earlier review (posted below) and which was also used on Spragga's album.

Here's the video single "Shotta Culture" from the album of the same name:


The Lowender has various controls to help you get good results easily but be warned make sure your monitors can reproduce the frequencies it generates. If they don't a good pair of headphones will work. Going from left to right the first control is a blender which allows you to mix the direct signal with the sub "effect". You can use the slider to vary the amount or click on the 0, 50, 100 buttons. Right below that is the master output which comes in handy especially when feeding the lowender's output into other plugins such as a compressor/limiter. The bass synthesis section allows you to select between three types of subharmonics by choosing classic, guitar or bass. Classic is more like the dbx "boom box" type of synthesis while the guitar and bass are more geared towards enhancing the "lowest octave" of those instruments. The knobs above the two frequency bands (24-36hz and 36-56hz) are for adjusting the amount of "subs" that will be generated. Next we have a bass gate which comes in handy when using this plugin on live material so that the leakage doesn't get turned into unwanted rumble. It also works great for kicks that have been sampled off vinyl. Last but not least we have the Bass output section which has a Drive knob that adds saturation to the signal and a Lowpass knob that selects the cutoff frequency (lower gives a smoother sound).


"Shotta Culture" can be purchased on iTunes at http://itunes.apple.com/us/album/shotta-culture/id389713642

I also used the dbx 500 Subharmonic Synthesizer on the bass for Ini Kamoze's "Here Comes the Hotstepper" and "Nappy Heads" remix for The Fugees, both of which was produced by Salaam Remi @SaLaAMReMi. More recently I used the dbx 500 on the Mack Wilds "NY A Love Story" album.

Here's @MACKWILDS video single "Own It":


The dbx 500 Subharmonic Synthesizer or "Boom Box" as it was sometimes called is an effects box that does only one thing but does it extremely well. It synthesizes bass frequencies an octave lower than what's fed into it. The dbx 500 was originally designed to be used on large PA systems in clubs and live performances. It not only extends the low end but gives it a big beefy sound that's unmatched by other units. I originally started using this unit on my PA system with Cerwin Vega "Earthquake" speakers and continued using it in the studio for mixing. The dbx 500 has stereo unbalanced 1/4 inch inputs and outputs. There are two sets of outputs which can be selected with a switch. The main outs carry the direct signal plus the effect and the sub outs carry only the effect.

In the studio I ran the unit mono using one sub out and the unit receives signal from a send or buss. It is then returned to the console on a channel where it is further EQ'd and compressed. The unit only has two controls. First there is a Frequency Boost knob which boosts the level of the fundamental frequency and then there's the Subharmonic Level which determines how much subs is being synthesized by the unit. There's a green LED which lights up when subharmonic synthesis occurs. When using this unit be very careful of the level of the synthesized subs as it can easily blow your speakers. I usually put a limiter on the output of the dbx 500. Dbx also made other "Boom Boxes" such as the dbx 100, 110 and the 120a/120x/xp/x-ds series which has more controls. The dbx 500 was released in 1978 and was produced for only 2 years and is very difficult to find nowadays. The dbx 120A can be purchased at http://www.zzounds.com/item--DBX120A

Here's a link to a site that has information on all the different boxes dbx used to make: http://vintagedbx.free.fr/index_en.html

Posted by Unknown at 7:21 AM No comments: