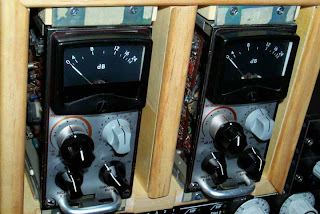 PYE Limiter/Compressors were made by Pye TVT in Cambridge, UK. It was originally intended for broadcast purposes and uses PWM (Pulse Width Modulation). There are at least 4 versions of Pye compressors and they sound great on drums, bass & guitar. A big part of the sound of Cat Stevens acoustic guitar on his 70's songs was due to the PYE compressor. They were used on Led Zeppelin's "When The Levee Breaks" - that drum sound that everyone knows and loves, that's the sound of the PYE at work. A pair of these in mint condition are hard to find and very expensive (they are known to have sold for as much as $11,000).
Waves currently sells the PIE compressor plugin ($300) which is their emulation of the PYE. Developed in association with producer/engineer Eddie Kramer, the PIE Compressor was precision-modeled on a vintage Pye compressor like the ones he used in historic sessions at London's Olympic Studios. A mainstay in esteemed British studios throughout the classic rock era, the original Pye processors are considered by many to be among of the best buss compressors of all time. The Waves PIE plug-in features a meticulously modeled VU meter with super-fast refresh rates that recreates the accuracy, sensitivity, and ballistic behavior of a physical analog meter.

Features:
Controls:
Posted by Unknown at 7:30 AM